Geek Native reviewed and enjoyed the Defiant RPG a year ago. It might seem odd to release a free quick start for the adult-leaning supernatural game now, but Game Machinery, the publisher, have a plan.

In Defiant, you are an ancient god, dragon, demon, fallen angel, or other powerful supernatural force.

Rather than destroy the world when the apocalypse came, you protected your part of it. After all, the world’s fun, engaging, full of pleasure, politics and drama.

The game was a hit. There was no plan for a print version, but now there is, and Game Machinery are working towards a Kickstarter to fund it and other supplements.

As the Kickstarter campaign will ask people to pony up for a full RPG, the print version makes sense to let people test the game. That’s what Defiant Awakening offers.

In Defiant Awakening, you will find a short Chronicle, taking place in the Bridgewood Boulevard Province, a few months before the events described in a main Defiant rulebook. You will be able to play as fallen Angels and Daeva, the ancient gods, and choose from several character creation options (no pre-designed characters). Aside from many NPCs and locations described in the book, there are six Threads and many Story Hooks to help the GM run the Chronicle without much effort. And if you get attached to your Characters, you can continue playing them in the main rulebook Chronicle.

Free to Download: Defiant Awakening – play as a fallen angel

Sites Audio EXP: #96 – Imagine being the idiot who… 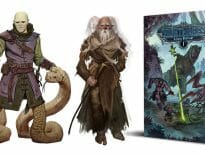