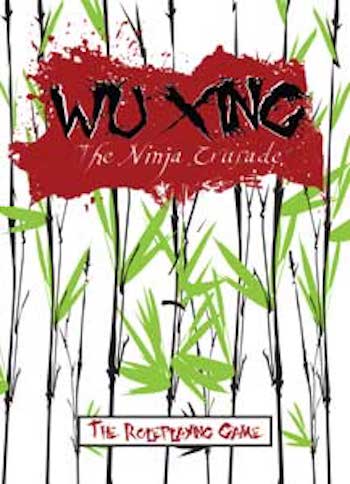 One of the last tabletop RPGs I got to play in was White Wolf’s Exalted. I had fun; enjoying the anime influence, a fantasy world that wasn’t derivative of Lord of the Rings and the cinematic martial arts. However, the game wasn’t without its challenges. The power levels of the heroes were so high that the scope of the game was always global, every action was gigantic, this was a challenge to the storyteller and it meant the characters spent more time worrying about the movement of huge armies and less about poison in their drinks.

I did enjoy Exalted but I also enjoy darker, more subtle, grittier games that are soaked richly in suspicion.

This is a ninja game that describes itself as “a game of suspicion and rebellion”. In fact, early on we’re told that Wu Xing offers intrigue, betrayal, personal and physical conflict as well as powers born of mystical training.

It’s the range of “powers” that first caught my attention in Wu Xing. The game is very much in the spirit of high Wuxia – not the Exalted levels, much lower key than that but it wasn’t surprising to see the anime/manga Naurto and Basilisk listed as inspirations in the game.

In fact, the anime influence is strong in the game. The artwork simply oozes it. Who doesn’t like sexy ninja women? I’m certainly not suggesting the game is all about skimpy clothes, sexy jutsu and seduction. Far from it. Wu Xing is far darker in tone than that. The game is set at a time when the 10 main clans of ninja have had to put aside their differences – or try to, to appear on the surface to be getting along – because the Empire has launched the war of the “Ninja Crusade” against them. Already many of the ninja’s hidden villages have been destroyed.

Okay; we’ve clans forced to cooperate in order to survive the crusade and we’ve got impressive ninja powers – experienced gamers reading this review will know where this is leading. It’s a simple but effective set up from Third Eye Games. Each ninja clan has its own set of mystical training, personality characteristics and each has its own set of friends and enemies among the other clans. For example, the clan known as Wardens of Equilibrium tends to use the fighting styles; Bear Style and Eagle Style, their favourite Wushu are Way of Balanced Scales, Way of Earth and Way of Survival, their clan gift is Balancing Act and their clan drawback is Unpredictable History. A typical viewpoint of one of the Wardens of Equilibrium of the Virtuous Body Gardeners is;

“Fantastic warriors with revolutionary wushu. They are our secret weapon against the Empire. Learn all you can, just in case they turn on us.”

This works well. It means new gamers have clear and carefully interwoven sign posts to how they could roleplay their characters – but more experienced players can safely play characters with less typical outlooks on rival clans and styles.

As the clans are so significant in the game and for the purposes of an enlightening review, I think we can get away with including the full list of clans and summary verbatim from the Wu Xing RPG PDF.

Grasping Shadows: Traditionalists, spies and assassins, they wield power over shadows and stealth

Living Chronicle: Historians, keeping knowledge alive in their minds and on their bodies

Pack of the Black Moon: Ranchers and farmers, they are experts on animals, especially dogs

Wardens of Equilibrium: Merchants, who seek to balance the world and turning a profit while doing so

Will of Iron: Sheriffs, they believe in invoking justice wherever they go

Ronin: The clanless, composed of exiles, rouges and wanderers

The mechanics behind the game is the Dynamic Gaming System. We’re talking 1d20 here. 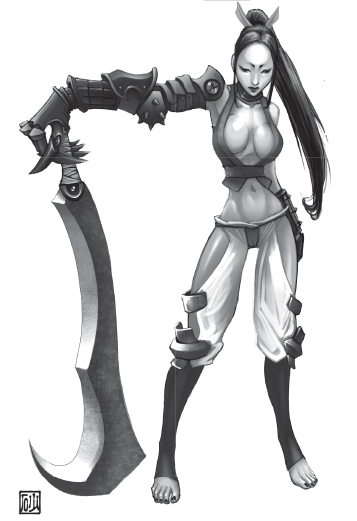 I’m not the type of reviewer to dig too deeply into the crunch. DGS certainly seems to work for me. This is not a play test review but after a couple of mock encounters and sample situations I didn’t find anything that was too awkward or clumsy. The single d20 roll means we’re operating in chunks of 5% and you’re as likely to roll 1 as you are likely to roll 20 (or any other number) so there’s not that much of a probability curve.

Wu Xing feels like a traditional RPG to me. This isn’t a dice system that tries to borrow from the teachings of MMORPGS. The mechanics aren’t arranged so that the group works together in carefully overlapped roles. Instead each ninja is a force within herself. I suspect that’s the style of game that Third Eye Games’ wants to write but it also feels like a necessity for any game that has betrayal and politics so close to its core – even a game that features chi powered martial arts.

It was also easy enough to whisk up a couple of test characters. I do prefer RPGs that want to take you through the setting, through the geographic and history of the game before giving you the chargen mechanics. Surely in order to create a good character you need to understand the story you’re creating a hero (or villain) for. Wu Xing is such a game and its telltale sign of a successful introduction that even as I was running through the chargen for review purposes it was easy enough to imagine mini back stories and ambitions for my characters.

What counts against Wu Xing? I suspect this is the usual bugbear that haunts “smaller games” – but why would anyone want to play Xu Wing? I’d want to play it if I’m riding high on an anime or wuxia kick. I’d then have to find enough gamers also in the same headspace to put together the group.

Although the game is well balanced and interesting – it doesn’t really let me dabble in anything new. This isn’t a game that challenges the traditional set up of an RPG. I wouldn’t necessarily describe Xu Wing as refreshing.

Disclaimer: My copy of Wu Xing is a review copy, it was supplied by Third Eye Games in the full knowledge that I’d trash the game if it didn’t come up to scratch. This isn’t a play test view. The cover image of Wu Xing links back to DriveThruRPG with an affiliate code.