There is a strong connection between anime franchises and trading cards. Pokemon, for example! Aniplex, that significant player in the anime space, is only now getting into TCGs.

It’s perhaps a bit odd that any company would take a look at the state of the trading card market in Japan and think, “Yeah, now’s the time”, but here we are.

Kakegurui scribes Homura Kawamoto and Hikaru Muno are writing an original story for the accompanying anime.

We’re told that the two will develop together, Yuhodo will work on the collectable card designs while Liden Films will do the anime.

The anime is called Build Divide – #000000 (Code Black)- (Liden did Cells at Work! Black, although the names may just be coincidence) and is due out in two parts, the first this year, the second next.

A city ruled by a “King,” where all superiority is determined by the strength of the TCG “Build Divide” – New Kyoto. There has been a rumor in this New Kyoto that says, “If you win against the King in Build Divide, anything you want will come true.” And in order to challenge the King, you must participate in a TCG battle called “Rebuild” and complete the “Key.”

-Everyone has a wish they want to come true. Teruto Kurabe, a boy who vows to defeat the King for a certain purpose, is led by a mysterious girl named Sakura Banka, and throws himself into the Rebuild Battle. Teruto and his friends’ battle now begins in the city of New Kyoto, which has been taken over by Build Divide! 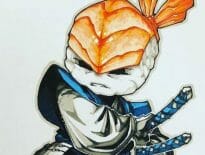