Irregular Reconnaissance: Anime is a compilation of mini-reviews.

The column’s objective is to provide a spoiler-free look at how series’s progress and to be a discovery system to find new titles. If you can scan down this and make some snap judgements on whether you’ll consider a title or skip it, then it’s a success.

It’s a simple format; the show’s English language title, the episodes that are the focus of attention, a few paragraphs of thought (but which don’t get into the plot), a terse final status and then a link to where you might legally find the show. Geographies allowing, that is.

Your own thoughts on the titles mentioned here are very welcome, as are your own recommendations of animes for either the hit or miss column. Just leave a note in the comments below but keep out spoilers in keeping with the spirit of the column. There’s a spoilers channel on the community Discord if you really have to get something off your chest.

I reached the end of a few good anime series this week, but I’m after 170 episodes, I’m putting Black Clover first.

The bad news is we don’t really reach much of a conclusion. The plot is in mid-drama with friends in jeopardy when the final curtain closes, and that’s a shame. The manga goes on, of course.

The good news is a feature-length animated Black Clover movie is confirmed, and we do reach a significant point in the plot. We learn a little more about Asta.

Should you start watching Black Clover now? Yes, it’s absolutely worth your time. You’ll quickly be introduced into a world where everyone has magic, and two orphans from the countryside try and join the famous magic knights. The cast will soon grow on you, and the writers mix action with emotion.

Is that it? I have nothing against 8 or even 6-episode shows, but Dragon’s Blood seems to end so prematurely.

That’s the negative. There’s a lot more positive to say about this DOTA 2 show. Importantly, I’m writing as someone with very little knowledge of the game. I’ve no idea if the anime is being faithful to the lore or not, and it doesn’t bother me.

What I get from Dragon’s Blood is a fantasy world that’s both familiar and different at the same time. The typical elements are there, but clever adjustments have been made – such as the Shop Keeper’s Covenant – which keeps things interesting.

The characters are nuanced. You won’t always know who the “goodie” or “baddie” is, and I presume this reflects PvP elements in DOTA.

Well, now, in the past, I expressed some frustration at fans calling for The Promised Neverland to be cancelled because it wasn’t following the manga closely enough for their tastes.

I still think that was a foolish and entitled thing to do… but even I can see that some brutal cutting, cropping and chopping was done. The show just ends with a montage of other things that happened, or they didn’t cover.

What happened? Did they plan initially to do three seasons but then get told they only had two?

But, the disappointment of the rushed ending aside, I’m still going to recommend The Promised Neverland. Especially season one. The story of the orphans is a great one, and the less you know about it, the better.

The Promised Neverland gets a good IR rating from me. It should have had a great one.

I think episode 12, that titanic battle, takes us to the end of the first half of season one, and there’s more to come. That’s fantastic news!

I cannot believe this anime did so well at spending 12 weeks telling the story of a white spider battling her way through a dungeon. Yes, we cut to some posh kids learning to be heroes and their own dramas now and then, but for the best part of the season, it’s spider charisma that holds our attention.

The world is currently full of Isekai shows in which people from our world are pulled into fantasy worlds. I see why they’re popular; it’s a lovely thing to imagine, an easy life as a hero thanks to serendipity. So I’m a Spider, So What? takes that and says, “Oh yeah? But what if you turned into a spider rather than a cool hero?” and then runs (on all legs) with it and does fantastically well.

The only thing I didn’t like was the CGI-style enemies in the labyrinth. Why make that choice?

Now I’m worried about the future. Can part two keep this up?

With Black Clover finished, I’ve settled on World Trigger as the anime that might fill the space. It has the advantage of having a fat season one already complete and a season two. It hasn’t gripped me as quickly as Blak Clover did.

Strange aliens attack the world or, at least, this one particular city. Standard military options are useless, but a mysterious faction of humans step in and drive the invaders out.

That happened a few years ago; now, living in the city is back to normal-ish, except there’s a towering castle where this human agency currently is stationed, and forbidden zones are marking the locations the aliens sometimes reappear.

We deal with the transfer student being powerful in the early episodes and apparently from this strange another dimension. I guess we take it from there, but this “naive but supernaturally strong” quirk is getting tired quickly.

As customary, the column concludes with an invitation for readers to get involved. If you’ve discovered any anime worth a recommendation or a warning, then consider letting us know in the comments below. 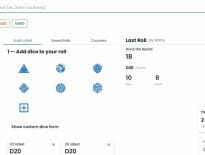 Sites Roll With Me is a free virtual tabletop dice rolle… 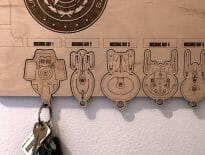 Geek Stuff Star Trek: A ships of the Federation key holder
wpDiscuzComment Author Info
Manage Cookie Consent
This site uses cookies 🍪, and links are ads that may earn bloggers some money 💰, and with this alert, I very much hope that these dark truths 🧌 are acknowledged.
Manage options Manage services Manage vendors Read more about these purposes
Preferences
{title} {title} {title}
Loading Comments...