Vampires & Claymores is a free to download tabletop RPG from TorTheVic.

If you want, you can offer some cash for the download and Geek Native accepted the suggested $3.50 set in Itch.io’s flexible “Name your own price” system.

On the other hand, you can see the entire RPG twice over in the preview art provided on the game’s page. Vampires & Claymores is a “pamphlet TTRPG”, and that means the on-screen formatting needs a little bit of thought. The idea is you print off the PDF as a single double-sided sheet and fold it into three.

That means the cover is the last thing on the first side, and then the first few content pages of the pamphlet are on page two of the print-out. It’s not hard to figure out, but it is something you might not have seen before.

The “Name your own price” mechanic works well for what’s a two-page micro-RPG but also one blessed with TorTheVic’s professionally illustrated front cover and a great layout.

Different coloured d6s are used in the straightforward system where players try to boost one dice value higher than the other. One is the Action Dice, which is boosted by having the right skills or gear. The Challenge Dice is the other, and it is increased by the task’s difficulty.

In Vampires & Claymores, you play as vampires but what that means is entirely up to you. There’s no background or plot nudges, just the atmosphere created by the design and the nudge from the ruleset. The implication, by name and mechanics, is that fighting and melee is not uncommon. It’s an indie RPG that provides a rules engine and then lets you get on with telling your dark vampire stories.

Vampires are immortal but use blood just by waking up and, of course, in fights. If their blood total hits zero, they go feral. A feral vampire is briefly out of play while off on a frenzied hunt for blood before returning fully fed but permanently weakened. If that happens off enough, once all of the vampire’s insights are lost, the character is beyond salvation and must retire as a PC.

Worried about printing out lavishly designed PDFs? Black and white and minimal black and white versions of the download are bundled with the game. 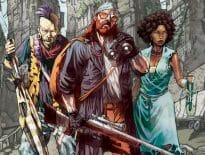 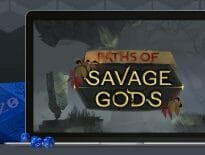