We’re looking at two from Crunchyroll’s latest batch of imports and three from Funimation’s catalogue.

It’s a hit, and mix collect and not all the shows make the cut. One is getting dropped from the watching schedule. As ever, if you think I’ve made a horrible mistake and judged a series too harshly then let me know in the comments below. Please, just avoid spoilers.

Regular readers of the Irregular will have noticed something new in recent Reconnaissance missions; the table of contents below. It’s a simple touch, but it seems to be working, giving readers a chance to skip straight to the review they’re interested in.

Nope, I’m giving up and moving on. I’m just not interested.

The first episode was all about a girl who cried sauce, then we had the guy with a candy cock, and I’m giving up now with after a schoolboy with chilli fingers. I was here for the mystery disease, not some weird food-body-part fetish.

To be clear, Dr Ramune isn’t terrible; the illustration quality is good, the voices spot on, backgrounds pretty good, and even the pacing works. I just don’t have time for another quirky food episode, not when there are so many other choices out there.

Let me know in the comments if you think I’ve made a mistake.

Hey, this is pretty fun.

In a sea of anime about people being reincarnated into a fantasy world, So I’m a Spider, So What? manages to stand out.

There are two plot threads which, I presume, will join up. Occasionally we visit the born-again classmates who, mostly, have become posh brats in a new magic school. One’s become something else, the old bully. The other plot is our spider.

What a great spider. So many expressions, not creepy at all and many innovative examples of emotion through legs.

Our spider hero has been born into a dangerous lair, and it seems pretty tough just to survive there. Slowly, but surely, she’s levelling up…

I look forward to the inevitable rendezvous.

I enjoyed this show, but I’m frustrated with the knowledge that it could have been much better. If only Warlords of Sigrdrifa had resisted the urge to throw in some fan service with a zany humour episode.

The aliens are attacking Earth, and humanity is losing until Odin appears and promises help. Afterwards, Valkyries are born who can command magical airplanes and do battle against the aliens.

Dark and sombre would have been a better tone or a war series packed with camaraderie but the show doesn’t seem to know where to go.

So-called plot twists are predictable, but it’s actually the feeling of inevitability that helps add a bit of tension.

Talentless Nana can’t quite follow that remarkable first episode, but it nearly gets there.

Our superheroes in training are effectively trapped on the island, and there’s a murderer afoot. Can the class catch the killer?

An important skill the writers have in Talentless Nana is the ability to quickly craft characters and make us care about them in no time. Without that attachment to the supers, then we might not worry about whether they live or die.

Nana herself is smart, but she’s not perfect. In this high stakes situation, every potential mistake is significant, and the series does a great job of reminding you.

Gleipnir is a horror anime, but only just. It gives you plenty to worry about, plenty to think about, and people will die.

What is lacks is a satisfactory ending. I very much hope there will be a season 2 of Gleipnir.

In a quirky bit of scriptwriting, our main character spends several scenes explaining that he views the unlikely events unfolding around him as a story and he knows he’s not the main character.

See, I did say Gleipnir will give you plenty to think about.

Do you agree with these mini-reviews? Use the comments below to share your spoiler-free thoughts on the shows. TV The Nevers: HBO gives us a look at their all Victo… 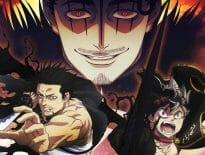