You are here: Home / Games / Tabletop & RPGs / Summon Skate: An interview with Silver Vine Publishing as they translate Japanese TTRPGs into English

RPGs are booming all over the world and not just in English speaking markets. As noted in the podcast, the two RPGs with the most significant growth on Roll20 in the last quarter are Tormenta, a Brazilian RPG and inSANE, a Japanese RPG.

Gamers are ready for something a little different.

Silver Vine Publishing may have timed their project to bring some indie Japanese TTRPGs to the West excellently.

Summon Skate is an unusual proposition for a tabletop RPG in that the PCs summoners who skate out magical sigils to summon Figures (gods and other mythical creatures) to battle the demons that threaten humanity. You can see the Kickstarter details on the campaign page.

A pledge of $13 will get you the PDF copy of the translate Summon Skate and access to an exclusive Discord channel.

It’s a simple campaign with one other backer level; $45 will get you the Discord perk, the PDF and saving of 10% off the print-on-demand version of the book.

You can find Silver Vine’s Discord here, if you have any questions about the project.

How did Silver Vine Publishing get into the business of translating Japanese tabletop RPGs into English?

Translating Japanese media and tabletop roleplaying have always been two of my biggest passions. I had always dreamed of doing a big project like the other recent Japanese tabletop RPG translation Kickstarters, but I didn’t have the connections to strike a deal with one of the big TRPG publishing companies. So, instead I turned my attention to indie creators who I could deal with person-to-person. I was absolutely blown away by how many unique titles were coming out every year from the Japanese indie TRPG scene, and it didn’t take me long to find many amazing creators who wanted to share their work with the world.

While I was in Japan during the winter of last year, I reached out to these creators through Twitter and attended several TRPG conventions and events to meet up with them and discuss the possibility of releasing their games in English. I think what helped me gain the trust of these individuals, as I was laying down the foundations of this project, was that I made it clear I wasn’t in this for profits. Silver Vine takes a very small cut of all our sales, and returns the rest directly to the original indie creators in Japan. I think the creators I drew up my first contracts with could tell I was sincere about my desire to connect them with fans around the world and support their current and future work.

Is the project a strict translation, or are there nuances and updates? For example, are you localising and adapting Summon Skate for the Western market or sticking closely to a verbatim translation?

Our aim is always to make the games as approachable as possible, even to people who aren’t familiar with Japanese culture and history. The level of localization required to make this possible varies greatly from game to game. Summon Skate is an extremely global game in that it has very few concepts or terms that I would say are uniquely Japanese, so we were able to leave it fairly untouched in that sense. However, some of the games I’ve been working on lately have required a more nuanced approach since they contained jokes and references that would leave most English-speaking players completely lost.

Thankfully we’re working directly with indie creators rather than big companies, so it’s a breeze to ping them on Discord and ask them what their intent for a certain line or joke was, so we can make sure that original intent gets preserved in the translation. This was the case with the title of Floria, actually. We arrived at the title only after a very long discussion with the original creator about her intent with the title and what imagery she wanted it to convey. This level of collaboration allows us to provide localizations that are both faithful to the original intent and easily understood by the target audience.

How do Japanese RPGs tend to differ from Dungeons & Dragons?

A lot of Japanese RPG gaming takes place at monthly mini-conventions where local RPG groups get together, or through online one-shots played on weekends. This has pushed a lot of Japanese game design to swing more toward streamlined experiences that focus mainly on each player having fun and getting their moment in the spotlight. What this means mechanically is many games break gameplay down into ‘scenes’ or ‘phases’ that each scenario will go through, with each one having a ‘scene player’ who is the focus of the scene. If playing Dungeons and Dragons is like writing an open-ended fantasy novel with your friends, Japanese RPGs tend to lean more toward the experience of being in a movie. There isn’t enough time to go off the rails on a single players’ whim, so instead the focus is on everyone getting a chance to do something cool while experiencing the story the GM has prepared for them.

How does Japanese society see tabletop gamers? Just a type of otaku?

As otaku are seen as somewhat synonymous with being a shut-in and antisocial, I think tabletop gamers are held in slightly higher regard than that. The nature of tabletop gaming means you need at least a few other players to enjoy the games, which means it requires social interaction. Since Japanese kids are encouraged to join clubs from an early age, I think being in a tabletop gaming group is seen as an extension of school club activity. It’s seen as positive to be out socializing with other folks who share your hobbies, as long as your hobbies don’t disrupt society and you don’t obsess too much about them when interacting with folks who don’t share those hobbies.

Why do you think there might be a market for Japanese games here in the West?

I think the popularity of anime and manga around the world has shown that there is a lot of interest in Japanese aesthetics and stories. The Japanese indie tabletop library is a nearly-untapped pool of tons of interesting titles, so I’m in a unique position to be able to select the ones I feel will have the greatest chance to thrive to bring over. Folks can expect each of our titles to be an experience unlike anything they’ve had in other RPGs, which is something I think a lot of RPG fans are looking for. Plus, it doesn’t hurt that these games have some incredible art.

What in particular about Summon Skate makes it the right choice for a first project for Silver Vine Publishing?

I played Summon Skate with the creator, Lin Yasuda, at an indie gaming event in Japan last year. From the first time I played it I knew I wanted it to be Silver Vine Publishing’s flagship title. Not only was it just a crazy fun and unique experience to play, it also had the most professional layout I had seen in any other indie title in Japan. Heck, with 150 full-color pages full of original illustrations and diagrams, it even puts many professionally published Japanese RPGs to shame.

But there was even more to it than that. Through Silver Vine, I wanted to shine a spotlight on creators that deserve the attention of the world, and Lin Yasuda is definitely one of those. I was impressed right off the bat to see Summon Skate had a sample character who was a wheelchair dancer, and that the game included nonbinary characters. The more I learned about Lin Yasuda, the more I wanted the world to know about him. He has spent his life studying ways to make tabletop gaming inclusive, and has several other projects besides Summon Skate that are focused on bringing children to the gaming table or helping neurodiverse players get into the hobby. He has given lectures at top Japanese universities about using games to teach and bridge the differences between us. This, more than anything else, made me want to focus on him as our very first creative partner.

We know that Floria: The Verdant Way is likely to be your next project. Are there any plans for a third?

Third and fourth and many more! There’s plenty more coming from Silver Vine Publishing, some of which we hope to be announcing very soon! We have several titles we’re finalizing negotiations on, and many more with creators who have expressed interest in working with us. Since we’re keeping our Kickstarters lean and simple, we hope to provide multiple new titles to our fans each year. I doubt we’re going to run out any time soon!

I mentioned that one of our goals is to connect global fans with these amazing Japanese creators, and that’s exactly what we’re doing. You can meet the creators of Summon Skate and Floria in the Silver Vine Publishing Discord! They’re very happy to chat with fans from around the world who are excited about playing their games. You can find a link to our Discord up on our homepage. Come join us and chat with other Japanese RPG fans and creators today!

Summon Skate: An interview with Silver Vine Publishing as they translate Japanese TTRPGs into English 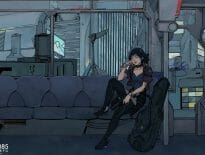 Music Lo-fi beats to overthrow the megacorporations to 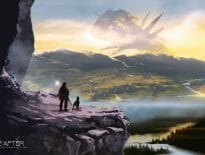