You are here: Home / Books / Racism and sexism blamed for ruining multi-million Dollar Dragonlance deal as Wizards of the Coast are taken to court

In a stunning development, Margaret Weis and Tracy Hickman, the creators of Dragonlance, have gone to the United States District Court for the Western District of Washington and filed a lawsuit against Wizards of the Coast.

Weis and Hickman claim that Wizards of the Coast have maliciously “nullify the millions of dollars in remuneration” the two authors were expecting from a new Dragonlance trilogy. They also claim this was done to deflect public outcry during a time when Wizards of the Coast where being accused of misogyny and racist hiring.

In 2017, Weis and Hickman approached WotC with a new Dragonlance trilogy idea. A deal was signed, and WotC had approved an outline of the first book in 2019.

The co-creators say in their claim that they did receive instructions and changes from Wizards of the Coast to keep the story “in keeping with the modern-day zeitgeist of a more inclusive and diverse story-world”, and that they acted and fulfilled those requests.

In August, this year, on a conference call attended by lots of lawyers, Weis and Hickman say they were told Wizards of the Coast would no longer approve any more drafts to the trilogy. Without WotC’s explicit approval, the three-book deal was dead in the water, as WotC owns the license.

Margaret Weis and Tracy Hickman’s lawyers argue this approach is unlawful and breaks the signed agreement.

Amazingly, the official filing then goes on to outline that Wizards of the Coast was embroiled in a PR disaster at the time, around racism and sexism and that the Dragonlance project was cancelled because of it.

Wizards had said that they’re actively looking to re-activate three old D&D settings. I guess Dragonlance isn’t one of them!

You can read the full document here.

NATURE OF THE ACTION

Margaret Weis (“Weis”) and Tracy Hickman (“Hickman”) (collectively with Margaret Weis, LLC, “Plaintiff-Creators”) are among the most widely-read and successful living authors and world-creators in the fantasy fiction arena. Over thirty-five years ago, Plaintiff- Creators conceived of and created the Dragonlance universe—a campaign setting for the “Dungeons & Dragons” roleplaying game, the rights to which are owned by Defendant. (In Dungeons & Dragons, gamers assume roles within a storyline and embark on a series of adventures—a “campaign”—in the context of a particular campaign setting.)

Plaintiff-Creators’ conception and development of the Dragonlance universe has given rise to, among other things, gaming modules, video games, merchandise, comic books, films, and a series of books set in the Dungeons & Dragons fantasy world. While other authors have been invited to participate in creating over 190 separate fictional works within the Dragonlance universe, often with Plaintiff-Creators as editors, Weis’s and Hickman’s own works remain by far the most familiar and salable. Their work has inspired generations of gamers, readers and enthusiasts, beginning in 1984 when they published their groundbreaking novel Dragons of Autumn Twilight, which launched the Dragonlance Chronicles trilogy. Their books have sold more than thirty million copies, and their Dragonlance World of Krynn is arguably the most successful and popular world in shared fiction, rivaled in the fantasy realm only by the renowned works created by J.R.R. Tolkien (which do not involve a shared fictional world). Within the Dragonlance universe, Plaintiff-Creators have authored or edited 31 separate books, short story anthologies, game materials, and art and reference books in a related series of works all dedicated to furthering the Dungeons & Dragons/Dragonlance brand.

In or around 2017, Plaintiff-Creators learned that Defendant was receptive to licensing its properties with established authors to revitalize the Dungeons & Dragons brand. After a ten-year hiatus, Plaintiff-Creators approached Defendant and began negotiating for a license to author a new Dragonlance trilogy. Plaintiff-Creators viewed the new trilogy as the capstone to their life’s work and as an offering to their multitude of fans who had clamored for a continuation of the series. Given that the Dragonlance series intellectual property is owned by Defendant, there could be no publication without a license. In March, 2019, the negotiations between the parties hereto culminated in new written licensing agreement whereby Weis and Hickman were to personally author and publish a new Dragonlance trilogy in conjunction with Penguin Random House, a highly prestigious book publisher (the “License Agreement”).

By the time the License Agreement was signed, Defendant had a full overview of the story and story arc, with considerable detail, of the planned trilogy. Defendant knew exactly the nature of the work it was going to receive and had pre-approved Penguin Random House as the publisher. Indeed, Defendant was at all times aware of the contract between Penguin Random House and Plaintiff-Creators (the “Publishing Agreement”) and its terms. In fact, the License Agreement expressly refers to the Publishing Agreement.

By June 2019, Defendant received and approved a full outline of the first contracted book in the trilogy (“Book 1”) and by November 2019 the publisher accepted a manuscript for Book 1. Plaintiff-Creators in turn sent the Book 1 manuscript to Defendant, who approved it in January 2020. In the meantime, Defendant was already approving foreign translation rights and encouraging Plaintiff-Creators to work on the subsequent novels.

During the development and writing process, Plaintiff-Creators met all contractual milestones and received all requisite approvals from Defendant. Defendant at all times knew that Hickman and Weis had devoted their full attention and time commitment to completing Book 1 and the trilogy as a whole in conformity with their contractual obligations. During the writing process, Defendant proposed certain changes in keeping with the modern-day zeitgeist of a more inclusive and diverse story-world. At each step, Plaintiff-Creators timely accommodated such requests, and all others, within the framework of their novels. This collaborative process tracks with Section 2(a)(iii) of the License Agreement, which requires Defendant to approve Plaintiff- Creators’ drafts or, alternatively, provide written direction as to the changes that will result in Defendant’s approval of a draft.

On or about August 13, 2020, Defendant participated in a telephone conference with Plaintiff-Creators’ agents, which was attended by Defendant’s highest-level executives and attorneys as well as PRH executives and counsel. At that meeting, Defendant declared that it would not approve any further Drafts of Book 1 or any subsequent works in the trilogy, effectively repudiating and terminating the License Agreement. No reason was provided for the termination. (In any event, no material breaches or defaults were indicated or existed upon which to predicate a termination.) The termination was wholly arbitrary and without contractual basis. The termination was unlawful and in violation of multiple aspects of the License Agreement (arguably almost every part of it, in fact). The termination also had the knowing and premeditated effect of precluding publication and destroying the value of Plaintiff-Creators’ work—not to mention their publishing deal with Penguin Random House.

Defendant’s acts and failures to act breached the License Agreement and were made in stunning and brazen bad faith. Defendant acted with full knowledge that its unilateral decision would not only interfere with, but also would lay waste to, the years of work that Plaintiff-Creators had, to that point, put into the project. Given that the obligation to obtain a publisher was part and parcel of the License Agreement, Defendant was fully cognizant that its backdoor termination of the License Agreement would nullify the millions of dollars in remuneration to which Plaintiff-Creators were entitled from their publishing contract.

As Plaintiff-Creators subsequently learned, Defendant’s arbitrary decision to terminate the License Agreement—and thereby the book publishing contract—was based on events that had nothing to do with either the Work or Plaintiff-Creators. In fact, at nearly the exact point in time of the termination, Defendant was embroiled in a series of embarrassing public disputes whereby its non-Dragonlance publications were excoriated for racism and sexism. Moreover, the company itself was vilified by well-publicized allegations of misogyny and racist hiring and employment practices by and with respect to artists and employees unrelated to Dragonlance. Plaintiff-Creators are informed and believe, and based thereon allege, that a decision was made jointly by Defendant and its parent company, Hasbro, Inc., to deflect any possible criticism or further public outcry regarding Defendant’s other properties by effectively killing the Dragonlance deal with Plaintiff-Creators. The upshot of that was to inflict knowing, malicious and oppressive harm to Plaintiff-Creators and to interfere with their third- party contractual obligations, all to Plaintiff-Creator’s severe detriment and distress.

Unlock achievement badges by sharing observations about this article in the comments. 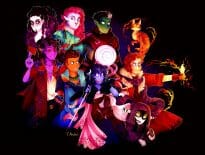 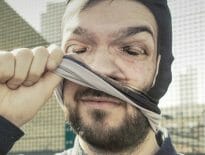 Geek Stuff 12 Masks of Halloween: #1 Your Stretched Face
💰 Copper Coins 💰 Geek Native is an affiliate and may earn commission on purchases you make from third-party sites.
🍪 Privacy & Cookies 🍪 The site uses cookies to survive. By accessing the site, you agree to use your browser to control cookie use or take 1d4-3 privacy damage (tracking). If you defeat cookies via ad blocking, please consider the Patreon. An intro to cookies, and how to control them, can be found here. I Manage Cookies