The Infinity Game Table from Arcade1UP is a touch screen monitor with four legs like a table. It is a table, although I’m not too sure about plopping my coffee mug down on it.

Playing board games without any physical pieces or the need to fill a cupboard with all the boxes required is the name of the game here, and it’s one that’s growing in popularity.

At the time of writing, there’s still more than a month to decide whether you want to invest in this first generation of home hardware, but over 1,000 gamers are already in. Arcade1UP asked for $50,000 to make this happen and already have over $720,000 pledged. You can follow the latest progress from their campaign page.

There’s no toe in the water option when it comes to pledges. However, there are no unlimited tiers, either. Everything is selling out.

The first tier with a reward starts at $499 (about £387), and that’ll get you a 24″ Infinity Table. The predictable but significant catch? It ships to North America only.

There’s a portable version of the 24″ table up next, at $579 (£450) which comes with a big battery. It’s not portable enough to head South, or over water though, and the tier is still restricted to North America only.

At the current rate, all the “lower-cost” tiers will be filled by the end of the weekend, leaving on US$1,000+ options for more than one table or the founder’s tier.

I can’t fault Arcade1UP for the technique. Some might slam it as scarcity marketing, but I suspect it’s also very much about the logistics. It can’t be easy making these tables.

Notably, the company has deals in place with Asmodee and Hasbro. This means they can bring and sell digital board games to Infinity Table users via the store. As hypothesised in Audio EXP #60 some heavyweight investors are looking very seriously at the future of digital gaming, and they like what they see. I’m sure both Hasbro and Asmodee are watching the progress of the Infinity Table with interest. 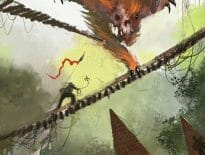