You are here: Home / TV / Anime / Good things in small packages: A review of Burn the Witch

You can watch Burn the Witch on Crunchyroll after it released yesterday. Many people will do so as it’s the first anime of a Tite Kubo manga since the hugely popular and yet frustratingly cancelled Bleach.

Here’s the short review: Loads of fun. It just goes to show you that big stories can be told in three short episodes, despite the challenges.

The premises is this; there are two Londons, the mundane “Front London” which is our world and then the more mysterious “Reverse London”. Dragons are responsible for over 70% of deaths in London (we don’t know whether this is both or just one) and only people from Reverse London can see them.

Our Witches are two “pipers” from Reverse London. They’re duty, for which they’re awarded both merit points and cash, is to help manage the dragons in greenspaces just outside the city.

Reverse London looks a lot like Edinburgh. There’s a scene that seems to show Arthur’s Seat, another of The Dugald Stewart Monument and the streets look like the Scottish capital. I may be biased, but there’s unmistakenly a solitaire in the window of a building in one of the scenes.

There’s also a Bleach Easter Egg at the final scene in which a plaque reveals a particular part of Reverse London to be the Soul Society Western Branch.

We quickly meet our witches and understand the lay of the land in the first episode. They’re both headstrong and capable, neither is keeping the dragons in check through any sense of altruism.

In the trailer, it might look like that rather than swords – as we’d find in Bleach and so many anime – that these witches have 60s style ray guns. They don’t; they’re horns or pipes.

A climactic scene has the bloke-in-distress carried off by a dragon-dog that seems to be chirping “Show me your panties”. Oh, I know. Anime is full of objectification and escapism, but a panties gag felt out of place in Burn the Witch. We’d already established our two lead characters are modern women, and we’d just introduced a bloke-in-distress rather than a damsel. It was going well.

However, that encounter with the dragon-dog sets the rest of the plot in motion. The bloke-in-distress turns out to have a rare characteristic, and through that, we discover that Reverse London is a rather draconian place.

Ghillie Suit / She Makes Me Special

There’s so much action in episode 2; it’s impressive. It’s like a perfect join made by some expert carpenter.

The consequences of episode 1 come into effect and it means we get to see even more of Edinburgh/Reverse London and find out a little more about the witches. It’s a reminder that the architecture in Burn the Witch is amazingly illustrated, buildings have details and show, and you can even see the stonework.

The title of this review is “Good things in small packages” which is a nod to the anime being short but sweet. It’s also a nod to the two little dragons, both charismatically derpy, that the pair fly on.

These two practical pet dragons, I think, are important. They prove that dragons are allowed and trusted in Reverse London, these two aren’t kept to the wilds outside. More on that later.

The join of plots come when events that happened in Front London cause ripples in Reverse London.

If a lion could speak, we couldn’t understand

It’s hard to review this episode without spoilers, but I think it’ll leave you with some sympathy for the dragons.

And if it leaves you with sympathy for the dragons, then it might raise questions about the role of the witches and their desire for cash and merit.

There’s a lot that Burn the Witch hints at but doesn’t get into it. Just how much of a typical place is Reverse London. Just how often are dragons are a problem? And these unanswered questions come into mind sharply at the three-episode series wraps up.

That panties gag comes back again, and spite now being in 66% of the episodes; still feels out of place. Who would wear a fluttery skirt and ride a dragon too?

Burn the Witch was a great hour to carve out of a busy Friday night and I’m glad I did.

Good things in small packages: A review of Burn the Witch 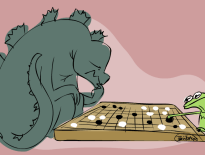 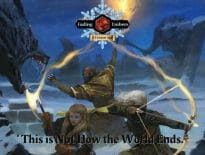 Tabletop & RPGs Fading Embers brings even more ice to 5e
💰 Copper Coins 💰 Geek Native is an affiliate and may earn commission on purchases you make from third-party sites.
🍪 Privacy & Cookies 🍪 The site uses cookies to survive. By accessing the site, you agree to use your browser to control cookie use or take 1d4-3 privacy damage (tracking). If you defeat cookies via ad blocking, please consider the Patreon. An intro to cookies, and how to control them, can be found here. I Manage Cookies