Through a Crunchyroll co-production, the smartphone game Katana Maidens – Tomoshibi is getting a two-part anime, Toji no Miko. The voice actors from the game and original series are back to reprise their roles.

The official police squad are also shrine maidens and school girls. They wield swords known as Toji and are capable of exorcising monsters known as aradama.

When possible, the girls live a normal school life, even if they’re allowed to carry their swords. In the spring, competing schools send their best Toji users to compete in a tournament and train together.

The original anime series, is on Crunchyroll and the dubbed version on Funimation. 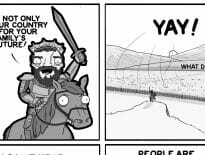 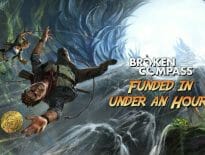 Tabletop & RPGs Early bird deal alert: Broken Compass the adventur…
💰 Copper Coins 💰 Geek Native is an affiliate and may earn commission on purchases you make from third-party sites.
🍪 Privacy & Cookies 🍪 The site uses cookies to survive. By accessing the site, you agree to use your browser to control cookie use or take 1d4-3 privacy damage (tracking). If you defeat cookies via ad blocking, please consider the Patreon. An intro to cookies, and how to control them, can be found here. I Manage Cookies