There’s been a lot of attention on Sunghoo Park’s forthcoming horror anime Jujutsu Kaisen. In part, that’ll be due to Park’s success with The God of High School and the cast of actors recruited for the show.

In Jujutsu Kaisen curses and negative emotions are real and manifest things; they can lead people to misfortune or death. What defeats them? Another Curse.

The main character is a young man with incredible strength, but an average life called Itadori Yuji. One day Yuji has to save a friend who is being attacked by Curses, so eats the finger of the Double-Faced Spectre and takes on that particular Curse himself. Now, possessing a Curse himself, Itadori Yuji is taken in an organisation called Tokyo Metropolitan Technical High School of Sorcery that fights Curses.

The anime is due to start in Japan on the 2nd of October and Crunchyroll will stream it in most places around the world shortly afterwards.

This new trailer for Jujutsu Kaisen comes out during the first Virtual Crunchyroll Expo and the launch of the new Crunchyroll Loot Crate.

Are you looking forward to Jujutsu Kaisen? How do you think it’ll compare to The God of High School? 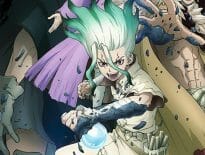