You are here: Home / TV / Anime / Fate/Grand Order The Movie Divine Realm of the Round Table: Camelot trailer

If “Fate/Grand Order The Movie Divine Realm of the Round Table: Camelot” wasn’t already long enough for an anime title, this trailer is just for the first of the two films in the series; Wandering: Agateram.

The other is Paladin: Agateram.

Both movies adapt Aniplex’s computer game Order VI: The Sacred Round Table Realm: Camelot, taking its plot and bringing it to life as an anime. Fate is a well-liked property, and even doing a twin-set of movies probably feels like a safe bet.

This trailer is the first to feature the theme song from the film, by Maaya Sakamoto it is called Monologue and the unveil game with a visual of the knight Bedivere.

Fate properties often rope in Arthurian characters but this one is heavy on them. We’re expecting Gawain, Mordred, Lancelot, Tristan and Agravain in this Wandering: Agateram.

However, it’s Bedivere who will be one of the central characters. In many Arthurian myths, Bedivere is a one-handed warrior, marshal of Arthur’s warriors and it is Bedivere who eventually returns Excalibur to the Lady in the Lake.

Fate Grand/Order Wandering: Agateram was supposed to open in August, but was delayed due to the lockdown in Japan and has been rescheduled to December.

Fate/Grand Order The Movie Divine Realm of the Round Table: Camelot trailer 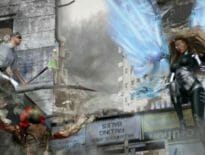 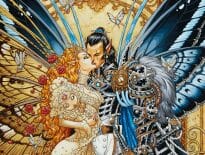