You are here: Home / Geek Stuff / Geeklore: The Wilhelm Scream

The Wilhelm scream is a commonly used sound effect. It was first used in the film Distant Drums back in 1951. It’s since been in all Star Wars films, most Lord of the Rings films and even Indiana Jones.

The widespread use of the sound effect is creditted to picture sound designer Ben Burtt who added it to Star Wars: A New Hope.

The following is a YouTube clip of many Wilhelm Screams. We feature everything from superheroes, to King Kong and even Family Guy. 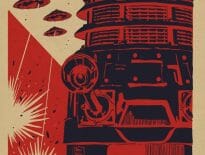