This week Massif Press withdrew Lancer this indie sci-fi RPG from the ENnies in protest over Blood in the Chocolate winning Best Adventure back in 2017.

The Lamentations of the Flame Princess game features many disturbing scenes with possible sexual assault.

The ENnies have had a change of leadership and policy since then.

However, today Kiel Chenier blogged that they are disowning the adventure.

I am disowning Blood in the Chocolate, and deeply regret its publication, and the award it won. I no longer accept the award.

I’ve apologized for individual aspects of Blood in the Chocolate in the past, both publicly and privately. I’d regretted its content and the success it enjoyed for a while now, but I hadn’t publicly addressed it in any meaningful way. I am now.

Chenier explains that they no longer write for Lamentations of the Flame Princess, stepping away from the publisher after founder James Raggi used the controversial Jordan Petersen to promote the company.

However, Chenier cannot withdraw Blood in the Chocolate from sale as they do not own the rights to it;

The rights to the book are currently still contractually held by James Raggi and LotFP until 2021, at which point the rights revert back to me. Until then legally I cannot remove it from the Drive Thru RPG platform. When the rights revert back, I will not be republishing this book through LotFP or any other publisher.

While Chenier does say they wanted to draw attention to the horrors of the colonialist capitalist machine by writing the adventure, they also concede their intention was to shock.

LotFP is a brand that trades on shock value, graphic imagery, and controversy, and I naively wanted to be in line with that brand. I made everything in the book mired in body horror, sex, and violence without regard to how ignorant, sexist, and racist it was. It was always those things, and I was willfully ignorant to them. I regret this more than anything. At the time I was willing to ignore the harm that the depictions of these things (racist depictions, sexual assault) would do simply because I wanted to appeal to an edgy demographic.

This is next-level cringe.

In an attempt to out-woke himself, Kiel Chenier has fallen even farther in gamers’ estimation. I remember when Kiel complained about reinforcing stereotypes, cliched tropes, or whatever nonsense while reviewing my The Islands of Purple-Haunted Putrescence… and then agreed to review my sleazy sci-fi Alpha Blue, but then found it too problematic and hetero-normative to actually post the review on his blog.

If possible, I’d love to see all these radical leftists flushed out in November with the rest of the post-modernist neo-Marxist trash.

Do you speak for all gamers?

I speak for the silent majority. We shall overcome.

Do you believe Kiel’s apologetic groveling for elf-game thought-crimes is not worthy of ridicule?

I think public opinion of Kiel as dramatically improved has a result of disowning the book and stepping away from LotFP. I think if you consider opposition to Jordan B Petersen to be “radical leftist” then you are disturbingly far to the right. That’s not the silent majority. That’s the vocal frothing of an insecure self-referential circle-jerk cluster. If I’m wrong, then I’m sure we’ll discover that LotFP’s sales have been booming all this time, kept safely afloat by the silent majority who seem to have appointed you (perhaps silently) their spokesalien. Of course, if I’m right then a book… Read more »

Where does neo marxism come in fir Chrissakes? Because I want it…😎 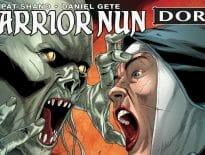