You are here: Home / TV / Where can I watch Stargirl in the UK?

In the States, DC has a decent success on its hands with Stargirl. It’s the story of a young woman who not only becomes a superhero but inspires a group of other heroes to reforge The Justice Society of America.

Now, TVWise is reporting that Amazon Prime Video has picked up the rights to the show.

We’ll have to wait until August 21st before the nostalgic superhero action reaches the platform, though.

This has happened before. Here in the UK, if we wanted to watch the underrated Swamp Thing, we had to do it via Amazon Prime.

In fact, Amazon UK fairly often picks up American programs, and their acquisitions include Picard, Vikings, American Gods and Outlander.

The new TV version of Stargirl has been created by Geoff Johns, who also co-created the character in comic books.

Brec Bessinger plays Courtney Whitmore, who become Stargirl, and Luke Wilson takes on the mantle of Pat Duan (aka S.T.R.I.P.E.) as Whitmore’s stepdad but also former sidekick to the original Starman.

Other key characters are Wildcat II, Doctor Mid-Nite II and Hourman II who align with Stargirl and S.T.R.I.P.E. in the Justice Society. There’s also Icicle, Brainwave, Tigress, Wizard and Sportsmaster from the Injustice League who oppose them.

Where can I watch Stargirl in the UK? 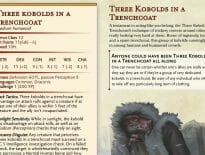 Tabletop & RPGs Three kobolds in a trenchcoat get a statblock