The latest round of Dungeons & Dragons playtesting from Wizards of the Coast is out. Unearthed Arcana dabbles in tattoos.

You can grab the PDF from here.

Introduced are new spells for Bards, Druid, Clerics, Paladin, Ranger, Sorcerer, Warlock and Wizards. The spells are focused around summoning spirits or shrouds. Wizards, though, get a 1st-level evocation that lets them shoot a stream of acid.

The rarer the tattoo, the more space it takes up, however, there’s more than just physicality to the magic. Once inked the mystical effect of the symbol isn’t removed even if the tattoo is.

A common tattoo is usually anything up to six inches whereas a legendary one will cover two limbs and the torso. 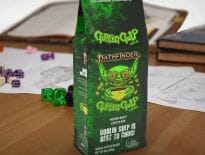