I seldom play with minis, and despite that, I’ve backed battle mats on Kickstarter, and I’m tempted by Real Game FX. I tried to create a fog effect once with incense. It doesn’t work. Whereas Fog Monster 2 is the evolution of two already successful projects and clearly works.

I’m not alone. Hundreds of gamers have backed Fog Monster 2, smashing the $25,000 pledge goal with more than two weeks left to take the total pledged beyond $45,000. You can follow the progress at the campaign page.

Fog Monster 2 is a smoke machine that’s built into gaming tiles. It’ll turn your gaming den, if you have one, into a kick-ass mini-movie set. Or your dining room table. I have neither, so as much as I fancy Fog Monster 2, it’s not for me.

Surprisingly, there are low-level tiers. A pledge of $5 gets you aid and $10 gets you light packs.

It’s not until you hit $75 that you get the early bird offer for Fog Monster 2 head upgrade; this is a part that fits over Fog Monster 1. Don’t have a Fog Monster 1? This part is no good for you.

The Fog Monster 2 isn’t that far away. It’s $119 on early bird and $125 without that discount. The MSRP will be $149, so it’s saving either way. You’ll get the power adapter and the small ground-level pipe pack to ensure you can use your mini fog machine for your gaming. 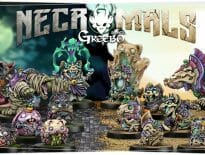