Larian’s Swen Vincke will play the game, on stage, with a special but currently secret guest. The show will be streamed while the 1,000 people in the physical audience will get a chance to ask questions.

The studio has had to employee loads new people and beef up their technology to make the game. The teaser video shows lots of motion capture and music.

We’re told that the game will be a next-generation RPG with more than 100 hours of content and some surprises.

You are burdened with a great power devouring you from within.

How far down the path of darkness will you let it take you?

The fate of Faerûn is on your party’s shoulders.

Will you carry it to salvation, or descend with it to hell? 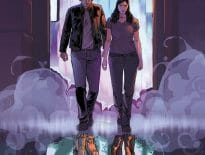 Comics The appeal of the anti-hero: Woodland Creatures ou…