You are here: Home / Games / Tabletop & RPGs / ICE on Rolemaster, HARP, Shadow World and Cyradon in 2020

In their first briefing for 2020, Iron Crown has confirmed that they expect HARP Subterfuge, Garden of Rain and Bestiary to be published this year.

HARP Beyond the Veil is still to be edited and HARP SF Poseidon Gambit, HARP SF Vehicles Compendium, HARP Dark Hunt, Caer Glais and HARP Something Wicked Something Wondrous are being written.

The update comes after Iron Crown’s director, Nicholas Caldwell, described 2019 as a year of unseen progress in which much has been accomplished, but not released.

The HARP setting Cyradon is such an example, with work progressing in 2020 but with the prediction, nothing may be visible for it for many months.

Shadow World will enjoy a mini-adventure called The Citadel of Osaran, which is in the final stages.

Cadwell has said that they would like to see a HARP Handbook for Shadow World, also adding that this could be a team project.

Peter R’s Priest-King of Shade, originally submitted to ICE back in 2013, is to be edited.

Once Priest-King, Beyond the Veil and the unnamed Cyradon projects are edited, then attention will shift to Rolemaster and Creature Law.

In the briefing, Cadwell also indicted the desire to boost ICE’s marketing and visibility. One way the company will do this is to work more closely with fans who want to run any of their games at conventions such as providing prizes and other means of support.

ICE on Rolemaster, HARP, Shadow World and Cyradon in 2020 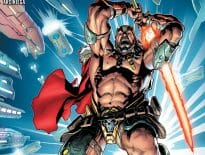 Comics Conan 2099 Is Out of This World