The Dark Lord has returned to a world of magic, united the Apex Powers in a fascist alliance. As heroes and characters in the Lightning War, your task is to fight back and resist evil.

Ben Sandfelder’s is on Kickstarter now, 18 days still to go when this blog post was going live and with £2,300 or so pledged of a $3,000 goal. So very close. You can check out the details and pledge at the campaign page.

A pledge of $15 will get you the core Lightning War rules ni PDF, a PDF of resources, all the stretch goals as PDFs and a print-on-demand at-cost coupon as well as your name in the book.

That’s it. As is increasingly the case, this Kickstarter is staying away from trying to pre-arrange a print run or take any margin on simply providing the at-cost printing coupons.

You can pledge higher, but that’ll just get you multiple copies of the game. That’s something to do if you like everyone in your gaming group, having the basic rules.

The streamlined system uses seven ability stats which typically range from 2 to 7. When you need to make a dice check to see if your character succeeded you role a dice determined by the situation. An easy challenge might mean rolling a d4 while a difficult one is a d12. If you equal or roll lower than your ability, then you’ve succeeded.

Sandfelder says combat is deadly, your character can be one-shotted but also, once per session, you can cheat death by revealing a little more about your character in a flashback. 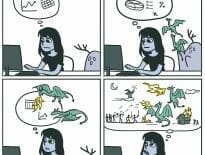 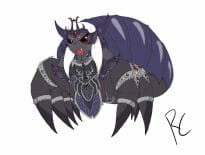 Art Lil’ chibi Lolth, the dark god of the Drow a…
wpDiscuzComment Author Info
Manage Cookie Consent
This site uses cookies 🍪, and links are ads that may earn bloggers some money 💰, and with this alert, I very much hope that these dark truths 🧌 are acknowledged.
Manage options Manage services Manage vendors Read more about these purposes
Preferences
{title} {title} {title}
Loading Comments...