You are here: Home / Music / Who sings the Dragon Ball Kai ending music?

Dragon Ball Kai is the replace and reboot series for Dragon Ball Z. You’ll know by now whether you’re a fan or not.

Lined up to sing the ending theme for this anime is a hugely popular Japanese pop group called AKB48.

Though “group” isn’t really the word I’d use to describe a collection of nearly 50 singers. Perhaps “pop choir” is a better phrase.

The new song isn’t written yet but here’s a YouTube of AKB48 performing the ending song of Ajirakuru! Mimika, a Japanese kids’ show.

Or if that doesn’t tickle your fancy, Kotaku found this publicity photo that might appeal more. 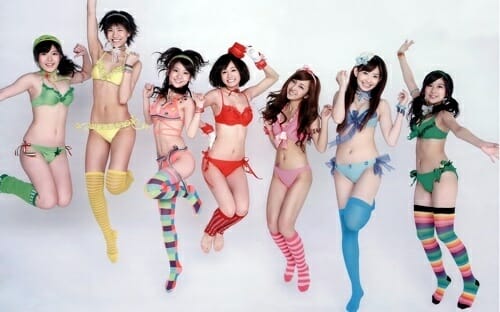 insulting pic to girls everywhere … INCLUDING ME ! AND THE SONG IS REMOVED ! ?

I hope you haven’t been too badly offended by the picture. I don’t think many DragonBall fans actually support the objectification of women.

Frustrating about the video. No way to tell when it’s been pulled until someone clicks play, notices it’s gone and posts – so that’s for doing so.

I’d say the image is fairly tame by Japanese standards though. Unusual to find an anime fan who would object to it