Chris Spivey, the multi-ENnie winning author of Harlem Unbound and his company Darker Hue Studios as an alternative history and weird west RPG that’s going great guns on Kickstarter since launching on Friday.

Haunted West asks for $10,000 to print the core rule book and with a whole month left on the clock, at the time of writing, the project has gathered $25,500 in backing. You can follow progress on the campaign page.

The sub-title for the Kickstarter is about amplifying the voices of the forgotten people of the old west. The game’s timeline re-writes history and the fate of the South after the American civil war, putting black farmers in charge.

A pledge of $20 is enough to get a digital version of the core rules, an old west cocktail recipe and access to purchasable physical add-ons. If you double up to $40, then you’ll also get the digital stretch goals.

A pledge of $55 is enough for a print version, but it depends whether you’re in the US or not, if the latter is true then this tier gets you access to DriveThruRPG’s print on demand.

There is no shortage of opportunities with the pledge tiers stretching up to $2,500. That’s a tier which already has one backer.

Equally, the Haunted West will not run dry of stretch goals with adventures like Town of Broken Horseshoe, and One Was Found. 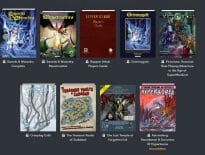