You are here: Home / Games / Tabletop & RPGs / D&D with the gloves off: A review of Fateforge – Adventurers

My review schedule ground to a halt with Fateforge Adventurers because the 400-page review is a tense collection of well thought out 5e rules, exciting twists and a promising setting. It took me some time to parse the game, giving it the attention it needed.

This could be 5e’s Dungeons & Dragons Advanced, except that the world of Fateforge feels nothing like the Forgotten Realms. Or any other D&D setting.

With all that going on, even after giving the RPG all the time it needed, I could not work out how to unpick it and present back any form of helpful evaluation.

Here’s the short form: this is a very impressive, detailed fantasy RPG with a far more sombre setting than the currently available D&D core offerings.

The dentistry of the 400 pages is one challenge for a reviewer and the fact that this is just a fraction of the basic Fateforge books is another. You can get Fateforge – Player’s Guide for free (66 pages) and Fateforge – Spellcaster’s Guide for free (62 pages) already. These two are the quickstarts or teasers. Along with Adventurers, the core book, still to come is the 320 paged Fateforge Spellbook: Grimoire and a Bestiary.

The idea in Fateforge is that the characters have been chosen by Fate. They are unique, but not so unusual that there aren’t other Fateforged or so securely appointed that they don’t have to fear death.

Some aspects of the Fateforge world of Eana is set in stone, some of them to be determined by the GM. For example, Melancholia and Eternity are the world’s two moons. However, the Fateforge as a physical entity may, or may not, be a thing. That’s up to the GM (known as Rules Leader here).

In Eana there’s a corruption known as the Canker that is bubbling up from underground. It’s a real thing and is the standout determining feature of the game. More so than the Fateforge (if that’s real at all) itself. The Canker is responsible for many of the world’s monsters and problems. There’s the sense it is only going to get worse and that brings the sombreness to the setting.

Despite differences, the backbone of Fateforge is D&D. You have D&D rules, classes and races but with twists.

The game introduces a new class called “The Scholar” to represent the inventors, healers and negotiators of the world. These are the people who know the lore and epic tales of the world of Eana.

The fantasy species in Eana are familiar but distinguishable from core D&D. Some just have setting appropriate names, some look different – Dragonborn look more like alligators to me – and with others, the changes are more significant.

How different Fateforge is from your D&D is up to you. It’s a modular system, and some of the rules are optional. These are handled well in the game, not just mechanically but also in presentation. They’re themed so you can pick and choose to weigh up or down certain factors.

My summary to you is that Fateforge is darker and magic more important.

The publisher, you see, is Studio Agate. This is a Parisian publisher who previously brought us Shadows of Esteren. Shadows of Esteren is the most awarded French roleplaying game, the English language translation near perfect and a classic example of dark fantasy.

Fateforge: Epic Tales in the World of Eana is not as dark as fantasy as Esteren. It’s more D&D than it is Shadows.

I like D&D’s rules, but the game is too basic for me

I don’t necessarily agree with the sentiment of the header above, but I’ve heard it a lot. If it describes your current relationship with the 5th edition, then Fateforge feels like a good match for you.

An excellent example of where Fateforge does more than D&D is culture and society. Fateforge tries very hard to create something new. Contrast that to the Forgotten Realms which kinda jigsaws established high fantasy concepts together – albeit fantasy concepts developed by D&D over the years.

In the chapter on languages we’re reminded there is no ‘Common’ there’s just what is common to the region the PCs are from. Then there are about a dozen standard languages, and we get to see examples of the various alphabets! All of a sudden, having a Scholar with the group becomes more attractive. Right? Then there’s a section on exotic languages and notes on how to make them sound right, secret languages (like Thieves Cant) and optional rules on how rare reading and writing might be.

Fateforge is a three-part book and part two is all about daily life. Here you’ll find rules on trade and how many resources it takes to do things like survive and maintain a lifestyle. It also has rules on how many resources you might earn as a talented bard in a vibrant and peaceful area compared to a small, dangerous and impoverished region. Oftentimes, traditional D&D books lean towards high fantasy and to keep things simple, don’t find the space for the mundane fantasy of daily life.

There are 50 new spells, 43 new feats and a whole new spin on magic. In Eana there are parts of the world where magic is stronger or weaker and so ‘geomagic’ becomes a thing.

You don’t need to take my word for it. Check out the free products: Fateforge – Player’s Guide and Fateforge – Spellcaster’s Guide to see that Studio Agate go heavy with fantastic illustrations.

The layout is busier than D&D and more atmospheric, pages are more weathered, borders are more dominant. As you can tell there is a lot squeezed into Fateforge. Studio Agate can’t be too generous with the whitespace, or the page count would far exceed 400!

That said, sometimes the decorative borders are pretty chunky and eat into the page. It adds to the look, and I don’t suppose Studio Agate would use that design when space was a significant problem. What’s more, puzzling is the inconsistency with the borders. It might be one of those things you don’t notice until someone points it out – sorry – but its rare Fateforge Adventurers maintains the same border decoration for more than a few pages in a row. And once you notice, it might become distracting.

This review is based on a PDF version of Adventurers. It’s a well-presented PDF, I’m reading in the Kindle app, and I’ve bookmarks of all the chapters and sub-headings available and this makes the digital document much easier to navigate. I do have Shadows of Esteren hardbacks, though, and they’re good quality. There’s every reason to believe Fateforge will be the same.

The very reasons that make Fateforge hard to unpack and layout in a review are the same reasons that the game may attract you. Or put you off. This is very much a D&D game, but it’s D&D with the gloves off, extra rules, extra attention to the world, additional consideration to balance and building games in layers.

Fateforge should do well. Will it do well enough to smash into the American markets? That’s less certain, but the game certainly could do that. I think the virtual tabletops would do well to woo Studio Agate and their illustrator skills.

My copy of Fateforge: Adventurers was provided for review.

D&D with the gloves off: A review of Fateforge – Adventurers 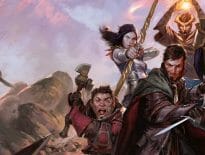 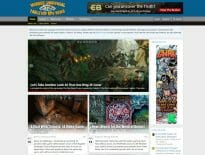