This is the director’s cut of the ad and, if you’re interested, the music is “Repair Machiens” by Vitalic. I don’t see much machine repair going on in this anime though! 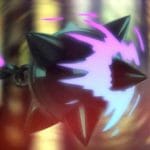