You are here: Home / Games / Tabletop & RPGs / A review of World of Darkness: The God Machine Chronicle 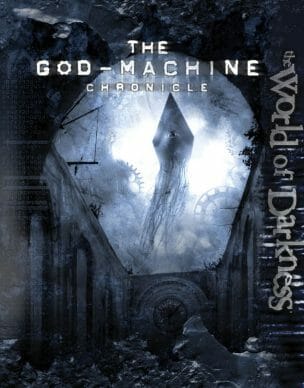 White Wolf’s World of Darkness: The God Machine Chronicle has topped the “Hottest Items” list for the publisher over at DriveThru RPG ever since it came out – so let’s take a look at it.

The premise is this: there’s a machine, a hugely intelligent machine, that straddles dimensions and orchestrates everything.

Why? What is it doing? Where did it came from? Who built it? These are all great questions. Some readers may be horrified to discover that The God Machine Chronicle does not answer them. Other readers will be relieved and pleased that White Wolf has designed in “keeping your options open”.

I started off rather disappointed that The God Machine Chronicle only gave me what-ifs and questions. I wanted to dig deep into this big secret in a setting built on secrets. For a while I actually felt cheated by the book.

As I continued through, read more of the rationale behind not committing to a grand reveal and read more of the what-if suggestions my opinion changed. I moved camps. I no longer feel cheated by The God Machine Chronicle. I feel empowered by the possibilities.

It some ways it feels like a TV series where you suspect the writers have to keep their options open. You can’t second guess too much. This applies to your players. As a storyteller the God Machine Chronicle empowers you by giving you permission to change your mind, adapt to the direction players are going and offer resolutions appropriate to the adventure.

The book is in five basic parts; the introduction and background, character generation, scenario ideas, NPCs and then rule revisions.

The introduction contains the what-ifs and exploration of the God Machine idea. I’m split between an occult origin for the machine and one of far future sci-fi. In either case, I rather like the idea that the machine is mad. 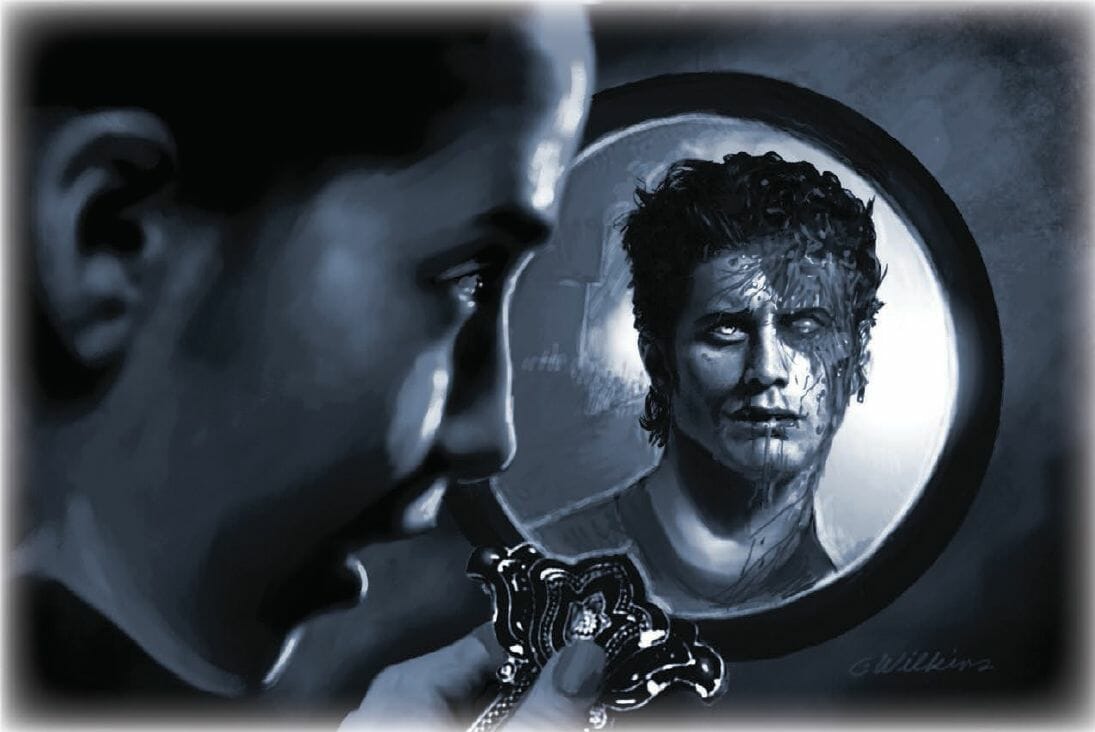 The character generation is set up with scope in mind. Will this be a small scale adventure? A local horror mystery? Or will this be a global battle with government organisations against the Illuminati.

If The God Machine Chronicle does not provide any answers it certainly provides many possibilities. There are 20 scenarios involving the God Machine in Chapter Two. These scenarios are of various scales with either the God Machine being in the distance – perhaps with characters dealing with a mad cult (who’s god is actually the machine) – or up close. None of them, thankfully, treat the God Machine as some sort of bad guy Mech with would levels and armour ratings.

That said; some of the scenarios do operate on a cosmic scale and I imagine could be used to change your World of Darkness scenario for ever. Each scenario has seven elements; the introduction, the infrastructure (the set), interchangeable parts (characters, tips), blueprints (the sketch that ties in the God Machine), linchpins (how the God Machine and its agencies manifest in this scenario), methods (ideas on how to get your characters into the scenario) and the Escalation (what happens next).

The fact that all twenty scenarios have an Escalation built in is appropriate. Whereas the God Machine Chronicle is designed to be open, not to tie the GM in to any one hard truth, it does feel that escalation is inevitable.

Even if you’re playing a local game, with low power levels and equipment then characters are surely going to dig up whispers of evidence or theories. Characters will act on hunches. Even if the PCs remain years and years away from discovering anything about a “God Machine” I suspect they’ll slowly deal with bigger and bigger issues related to it.

The third chapter is a heady collection of NPCs. We’re not just talking about cultists and corrupt politicians here. There’s over a dozen entities described as “Angels”. They are, of course, just powerful agents of the God Machine.

I’ve mixed feelings about the spread of NPCs provided.

It’s true to say that I don’t really need to pay White Wolf and a plethora of authors to create NPCs for me. I’m more than capable of creating my own dodgy cops, internet scammers with mysterious backers and oddly religious criminal masterminds. With that in mind then I would hardly need many of those NPCs to be sold to me or provided in this chapter. It’s good then that there’s lots of unusual creations instead.

On the other hand, this is the only section of the God Machine that really feels like a race to anime style clashes against cosmic entities. Even the cosmic scenario ideas feel they could be run in a fairly grim and gritty way, with a focus on people rather than powers – Fringe comes to mind. Taken out of context of the rest of the book, the NPCs here do seem to be supernatural titans. This is the chapter I’d least like any player to read. 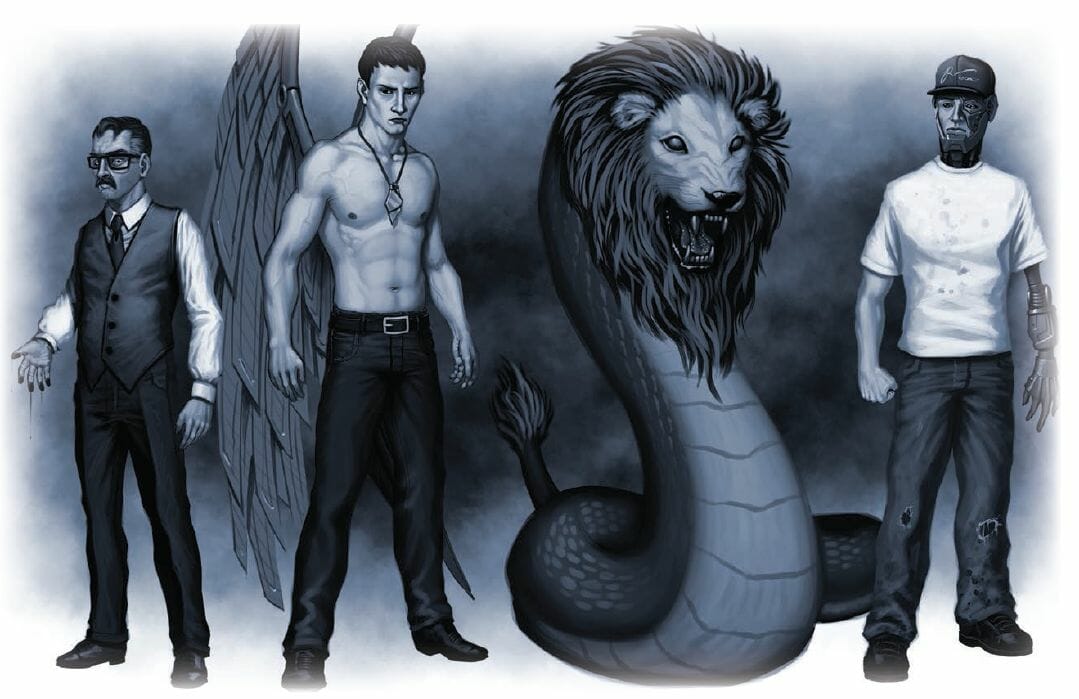 The last chapter in The God Machine Chronicle is classified as an appendix. It’s a fairy chunky appendix though, starting on page 150 of a 250 paged book. These are the rule revisions suggested to adapt the core World of Darkness rules to suit this story.

The remaining part of this book is taken up with updates to Storytelling — the changes we feel, after eight years’ experience, are needed to tighten the rules up for the intended setting going forward. This isn’t a rejection of what’s gone before, but the end result of our increasing familiarity with the Storytelling system and how it’s used in play. Future World of Darkness books will take these rules revisions as their baseline, the same way the World of Darkness Rulebook has been the basis for all the supplements and game lines so far. Individual game lines may produce “chronicle” books similar to this one that build off these revisions to revise and update the rules found in those lines, but these are the rules revisions for use with mortal characters in chronicles that do not use one of the other cores.

So does that mean we’ll see Vampire, Mage, Werewolf and Changeling Chronicles as well? It might – especially with the God Machine apparently selling well.

It makes sense that the rules revisions contained in The God Machine Chronicle are restricted to human characters. This section is already large and it would be far larger if it had to try and bring up to date all the supernatural rules as well.

The book does suggest a what-if where the God Machine can seem to effect the powers of the World of Darkness’ supernaturals too. A certain amount of hand-waving and confident storytelling may be required to tightly couple the machine to the mechanics of your current supernatural World of Darkness game.

Overall? I enjoyed the God Machine. I like the darkness. I like the idea that something alien and artificial lingers in the background and that you may accidently upset it.

My copy of The God Machine was provided for review. It is available at DriveThruRPG.

You know, the thing that I didn’t care for this is the plot seems out of touch with World of Darkness. It feels more… sci-fi or Matrix-like than what I would expect for a “default” WoD chronicle (I would have imagined more of a focus on supernatural things) and less “Oh hey there’s a machine of some kind that has manipulated humanity since the dawn of time and does weird things on a whim”.

A review of World of Darkness: The God Machine Chronicle