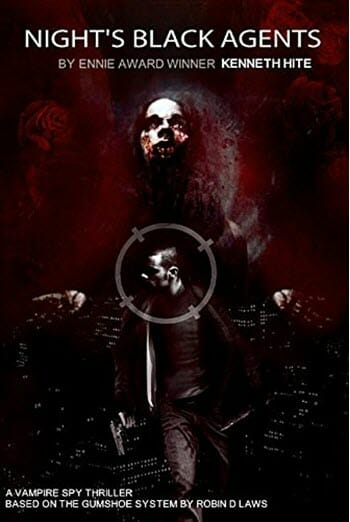 Authors Robin D Laws and Kenneth Hite are both talking about a vampire spy thriller game called Night’s Black Agents. It’ll be coming out Pelgrane Press and will be a Gumshoe title.

So, what’s a vampire spy thriller? Hite uses some popular movies to describe how the game will feel;

“Imagine the movie Ronin. All the shadowy figures you never see, the ones running the whole show, are vampires. Your characters — the Robert de Niros and Jean Renos — are blissfully unaware of this fact. Until the mask slips, and they find out. And the vampires have found out that you’ve found out. Now it’s the Bourne trilogy. Game on.”

Geek Native wanted to know more so I politely badgered Simon Rogers of Pelgrane Press with some questions. Here goes!

Q: There’s some big names associated with Night’s Black Agents. Will this be a key project for you?

This is Ken’s second project for Pelgrane Press, the first being Trail of Cthulhu – a major success in terms of sales and crtical acclaim. So, yes, it will be a key project. I’m already considering how best to support it. Straightforward adventures might not work, exactly, but we could perhaps do an Armitage Files style supplement which includes evidence that the players and GM use to devise a mystery.

Q: Who’s idea was it? Did they have to pitch the idea to get Pelgrane press on board?

It was Ken’s idea, and he pitched it, though I think he’s been running it with his group for a while. We’d been discussing a number of GUMSHOE projects, but this one was the only one originating solely with Ken. He’s very enthusiastic about this one, and I’m curious to see what he will do. After Trail, he deserves a free hand!

Q: Why vampires? Isn’t there the risk that vampire RPG players already have a feast of games to sink their teeth into?

I had an idea when we were planning the Dying Earth, which was that everyone in the Dying Earth setting has a differing interpretation of what particular creatures looked like and what they can do. Ken continued with this in Trail of Cthuhlu – every god and creature has multiple possible explanations, retaining the sense of mystery which Lovecraft engenders, rather than “it’s a Deep One, three shot gun blasts ought to do it.” So, in this game, every vampire conspiracy will be different, that is, the vampires and the conspiracy. The book will include sample conspiracies as well as suggestions on creating your own. For example, are they supernatural, or parabilogical? What are their vulnerabilities? How many are there? How old is the conspiracy and what is its political alignment?

Q: Was Gumshoe created with this sort of genre in mind. Sure; we’ve got the thriller/investigation aspect… but the supernatural and the sort of action levels associated with the Bourne trilogy as well?

The investigative engine is independent of the rule set for everything else; combat, chases, anything where a random element is fun. Night’s Black Agents will include thriller combat rules based on the Esoterror Factbook, with dramatic chases. High general abilities will also give you extra cool options for the ability. Trail of Cthulhu handles the supernatural very well, so we have a precedent for this. In addition, in the spirit of the Preparedness and Language options, which let you specify what you have with you and what languages you know on the fly, we’ll have Cover and Network, which will let you specify your indentities and contacts as you play.

Q: Is this going to be a hi-tech game too? Will we see vampires with all sorts of vampire-slaying gadgets?

It will be high tech, with sections on special weapons (Super Soaker Holy Water dispenser anyone?) spy tradecraft and updated equipment lists.

Q: What about magic and supernatural powers? Should we expect a dose of the fantastic in this game too?

The agents will be human; the vampires and associated creatures will have the powers. The creatures may well have these powers, depending on the nature of the vampires. Whether agents can use magiv will depend on the supernatural dial, but also whether the setting is more Esoterrorists (never a good idea to use magic), or Trail (usually not a good idea to use magic).

About this time next year.

Q: Any artists lined up for the project? Can you let us see any of the artwork yet?

Not as yet. I think Jerome’s photomontage technique would work well though. Take a look at the Esoterrorist front cover and the Factbook interior to get a good idea.

GUMSHOE is creeping closer and closer to doing the Night Watch RPG. Look forward to this one.

As in the Russian trilogy that got turned into a set of movies? That would be a fantastic RPG setting. Do you think that would be too big/too much of a risk franchise for Pelgrane Press though?