You are here: Home / Games / Tabletop & RPGs / Now I Suspect You of Weaselry: A Review of The Gaean Reach 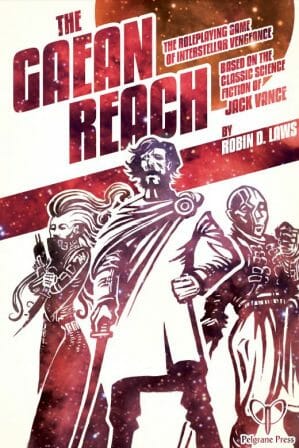 The Gaean Reach from Pelgrane Press

I must admit to having only a fleeting exposure to the works of Jack Vance, though I’m currently seeking to correct that by reading more of his work. For many, Vance has a strong link various editions of Dungeons & Dragons, where the mechanisms for spell-casting owe a debt to his Dying Earth books.

Pelgrane Press have published two versions of a Dying Earth role-playing game, but haven’t explored any of Vance’s other works before now. In The Gaean Reach, Robin Laws makes amends for this with a game that embraces a swathe of Vance’s science fiction output.

Vance’s books set in the Gaean Reach have an urbane feel, the wavering decline of colonialism into a state of middle class decline. This is a far future where humanity expanded out into the galaxy, and then mislaid the map. Adventurous types now claim worlds riddled with ruin and scattered with almost-humans adapted to their environment or living cheek-by-jowl with semi-sentient aliens.

So, what does The Gaean Reach have to offer at the gaming table?

This Would Look Lovely, from a Distance
The Gaean Reach is a digest-sized volume of 110-pages, written by Robin Laws and published by Pelgrane Press. I’m reviewing from the physical book, but with that comes a PDF copy for those inclined to use phones, tablets and other technology.

The physical copy comes on the same shiny, good weight paper as other Pelgrane books, like Night’s Black Agents or Ashen Stars, with a glossy cover featuring some stylistic strong character art by Chris Huth. Huth provides not only the cover art, but also the layout, art direction and some of the interior pieces, which is all to the good.

The Gaean Reach looks pretty spiffy. Inside, most of the text comes in two columns with a pleasant quantity of white space, clearly delineated boxed notes, and a fair smattering of black-and-white line art. The quality varies and the size of the images sometimes restricts their purpose or potential, but it doesn’t distract too much. Actually, some of the most effective art are the quite small, almost fleeting, images of worlds in the book’s Planets section. Throughout, cross-referencing appears for mechanics giving the page to check for explanations, and key words, mechanics and abilities appear in bold for easy spotting.

Let us Review from the Beginning, without Bafflement
At the heart of The Gaean Reach lies an essential principle: revenge. Quandos Vorn, or some other despicable villain type, has done you a wrong and in return you plan to serve up a chilled plate of interstellar vengeance.

The Gaean Reach reminded me a little of the science fiction of Buck Rogers and Flash Gordon, where most advancements in technology seem to be in hand weapons and floating cities. Rockets seem a dangerous form of transport at the best of times and humanity gets along with everyone else purely through force of arms and stern words. In space, no one can miss your terse and biting put down about your adversary’s suspect lineage.

The heart of The Gaean Reach lies in the Gumshoe system. Essentially, Gumshoe solves the age old problem of roleplaying sessions stopping dead because of poor dice rolls by ensuring the core clues – those that allow advance from A to E via B, C and D – never get missed. Characters can access other clues, that might prove useful, smooth the way, or reveal a sub-plot, through competence in one or more relevant Investigation abilities – like Bureaucracy, Flirting or Evidence Collection.

Here, Robin Laws has kept the system lean. To assist with this, he has taken a leaf out of another game – Skulduggery – and introduced a system of character creation that uses cards. Three sets out cards relate to a character’s Knowledge, Persona, and Life. Each presents one or more Investigative abilities, along with General abilities, which cover those do-or-die things like Scuffling, Athletics or maintaining your Wherewithal.

While the book also contains the more general Gumshoe approach of point assignment, this card-based innovation is great. It makes character creation incredibly easy, building up a skeleton of mechanics instantly and leaving players to concentrate on the personality and drives of their character. I would really like to see something similar included in future expansions and second editions of the Gumshoe system. As simple as the Gumshoe character creation process is, sometimes I have found players really struggling to fathom how to scatter their points productively. With these cards, you can get the points set down and the player can spin a tale around them.

Each player needs to decide what Terrible Deed Quandos Vorn inflicted on their character that ignited their appetite for revenge, and then what’s standing in their way of achieving that. The book suggests a process to layer each players purpose and drive around those of the others, providing them with a combined sense of purpose. Once the players each have a character with abilities and a purpose, the Gamemaster then randomly distributes three taglines.

This is the second difference from standard Gumshoe borrowed from Skulduggery. Taglines provide Vancian dialogue, which gives the game a more articulate and effete feel akin to the books. During play, players seek to weave their taglines into the story and, in return, acquire Tokens. The more apt the delivery, the more points rewarded – from zero for forced and ill-considered, to three for pitch perfect timing, whether comedic or dramatically.

What use such tokens, you might ask? Well, these aren’t strictly new to Gumshoe. TimeWatch, for example, uses tokens to ease the troubles in travelling through time or offsetting hurt through timey-wimey shenanigans. Here they function as part experience points, part safety net. You can acquire abilities no one has, improve those you already possess, or make a Desperate Bid to use a General ability you have zero in. You can also refresh spent points.

And, you can avoid certain death.

This one is the third and final acquisition (I think) from Skulduggery. Both key villains and player characters have a safety net. Some weapons in The Gaean Reach kill, no messing, with a single successful hit. Remember, this is the far future and a lot of people have spent much time and money coming up with some impressive ordinance. Players can spend two tokens to buy themselves a Fortunate Avoidance, preventing an instance of damage. It drives the token economy knowing that your next funny line might save your bacon sometime later in the adventure.

Key villains have something called Obstacle Costs. Every Gamemaster must have a story about the time the players managed to chance on a solution to his fiendish scenario almost by chance and killed the villain with a lucky critical. It sucks. Obstacle Costs make that harder to achieve at the start of an adventure, unless the player allots enough tokens to pay the Cost. However, as the adventure progresses, some Obstacle Cost reduce. So, if the characters put in the legwork to really get to grips with the villains plans, they can face her forewarned and forearmed, and pay a lower cost later in the adventure.

Now, that’s all been pretty crunchy, but the book offers more than just rules and mechanics. I just wanted to give an idea of how Robin has tweaked the Gumshoe paradigm to fit the unique environment and plotting of a tale from the Reach.

As well as character stuff and rules, you get 15-pages of background – A Mordent Future – on the setting and various planets, including lists of interesting places, features, flora and fauna. GM Tips and Tricks explains how to structure stories and series in the Gaean Reach, establish tone, create characters the point-spend way, and stat up opponents.

Finally, before the book rounds off with copies of all the character cards and taglines, comes adventure in The Cerulean Duke. The scenario pits a group of vengeance-seekers (that’s the favoured term for characters for most of the book) against an ally of Quandos Vorn intent on bringing about ecological disaster on the peaceful world of Chernil. Following on from the Tips and Tricks, this adventure has a solid structure by way of example, and offers a fine springboard to creating your own tales of revenge in the distant future.

Condense Your Dissertation
Strangely enough, one of the strongest reasons I can see for going out and buying The Gaean Reach right now is that it provides a great condensed version of the Gumshoe system. You get all essentials in a slim, attractive and easily portable volume, with some spiffy artwork.

The other reason would be the elements delivered by folding in a soupçon of Skulduggery that make the game so pick-up-and-play-able. Card based character generation means that you can have a game up and running in moments without resorting to fixed pre-gens. The wry witticisms of the punchline system gives the players an interesting extra objective for the session – and some people in my gaming group will positively eat it up and chew up the gaming table in their delivery. And Obstacles Costs – well, why not make the characters work harder and ensure the players can’t win by dint of pure luck and wild guesswork.

If you enjoy your science-fiction investigation a little harder, then you should look to Ashen Stars. However, should you be good with piquant, pulpy and packed with erudite moments of vengeance and comeuppance-style of science fiction, then I suspect purchase of The Gaean Reach would be worthy of consideration.

There’s mischief going on; you must put an end to it!

Now I Suspect You of Weaselry: A Review of The Gaean Reach 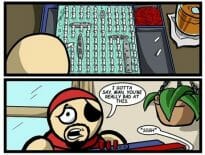 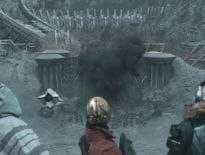