Last year, when White Wolf (as it was then) told the alt-right to F*ck off as part of long battle inflicted on the (then) besieged publisher simply because of its name, Geek Native illustrated the post with a picture of a Nazi vampire.

Nazi vampires are a common trope, one that gamers are familiar with but people complained. The problem? The image was popping up in social media. So Geek Native modified the code of the article so Facebook would pick a different picture instead. It cost nothing, and if fewer people were upset, then it felt like the right thing to do.

I suppose, also, there’s a difference between seeing Captain America or Indiana Jones punching a Nazi in a movie than seeing the Swastica unexpectedly on your Facebook wall while you’re trying slyly to check social media at work.

Some people grumbled. Some people always complain when there are restrictions put in place. I suspect the changing political climate added to the heat.

Other people were confused. Are Stormtroopers banned? They’re part of a fascist regime. What about Roy Mustang from Fullmetal Alchemist? He wears a military uniform of a totalitarian military government.

Now, with Anime NYC due to open its doors in November, show director Peter Tatara has had to clarify things.

I imagine people will still grumble. From Geek Native’s experience, though, the ban makes sense. If seeing a swastika in a vampire illustration, upset people then imagine the alarm that might be caused if three Nazi soldiers got on the bus to attend the convention.

Pointing out that the Nazi uniform was worn by a character in a show isn’t a loop hole. You can cosplay as Kung Fury Viking Warrior woman. You can’t cosplay at Anime NYC as one of the Nazis Kung Fury fought.

However, if the hate group isn’t real and is purely a work of fiction, then the cosplay is okay. You can cosplay as a Stormtrooper.

Tanya the Evil caused problems. The first Anime NYC cosplay ban policy cited Tanya as an example of a fictional character who was still part of an organised hate group. This was a mistake, now recognised and corrected. While Tanya the Evil’s military uniform looks very similar to an old World War style, it’s not the same. She fights for a fictional army. 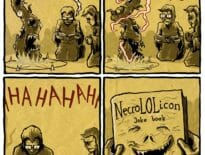 Comics Romance and Cthulhu: A Great Old One

Tabletop & RPGs Grimmerspace: Starfinder compatible sci-fi horror …
💰 Copper Coins 💰 Geek Native is an affiliate and may earn commission on purchases you make from third-party sites.
🍪 Privacy & Cookies 🍪 The site uses cookies to survive. By accessing the site, you agree to use your browser to control cookie use or take 1d4-3 privacy damage (tracking). If you defeat cookies via ad blocking, please consider the Patreon. An intro to cookies, and how to control them, can be found here. I Manage Cookies