You are here: Home / Games / Tabletop & RPGs / The alien races of Grimmerspace: An interview with Rone Barton

Rone Barton is the co-founder of Iron GM Games. Iron GM made headlines last month with the announcement of a Starfinder powered horror sci-fi called Grimmerspace. The Lord of the Rings and Stranger Things actor Sean Astin is involved with the project, and you can watch him talk about that and check out the (time-limited) free Abattoir 8 adventure here.

Could you quickly describe Grimmerspace for readers who haven’t yet had a chance to read about it?

Grimmerspace is a Starfinder compatible Sci-Fi horror setting and adventure book. The technic societies of the Gliding Rim Galaxy (aka the G-Rim) have long used their advanced weaponry and mastery of science to fight back against horrors from the edge of space, but when a tear in space-time opens up, the Sundermages emerge, nigh-immortal wizards from across the universe bent on conquest. Through this tear magic leaks into the G-Rim for the first time… and science fiction comes to world-ending blows with science fantasy.

Abattoir 8 has a pre-rolled Vesk character sheet in the appendix. Does this mean Grimmerspace is primarily using Starfinder races? Or will you be adding any of your own?

The races of the default Starfinder Roleplaying Game setting are new visitors to Grimmerspace, actually. They arrive with the Sundermages, just a few decades ago in the Grimmerspace timeline. For the most part, the natives of the G-Rim (who call themselves Grimmers) are human variants, although some vary pretty dramatically. Grimmerspace does introduce entirely alien races as well, and some of those are playable out of the gate.

How does Grimmerspace make these races feel different from any other sci-fi or Starfinder?

They’re grimmer and they’re grittier, which reflects the setting as a whole. And that’s the key. They’re different because they deeply reflect the setting aspects from which they arise, in flavor, theme, and mechanics. More specifically still they reflect the polity (Grimmerspace’s five star nations if you will) from which they originate, which in turn is, for example, thematically rooted in a particular kind of horror.

So take the “race” that originates in the Emanant Spectrality, one of our five polities. Thematically this polity represents the horrors that result when we refuse to face the inevitability of death, the twists and turns internally and externally we’ll resort to. The society of this polity experiments recklessly with genetic manipulation in the pursuit of life extension at any cost. Counter-intuitively (or so it seems) this results in superstitious, highly ritualized, and hedonistic culture. The race of Emanants and their racial abilities result directly from this genetic manipulation and the alien bio-technologies in which their culture is grounded.

What about NPC races? Are there any scary alien villains that might become iconic and synonymous with grim sci-fi?

The Sundermages were once human, But they’re far far from it at this point. When you read the book, you’ll understand why the cenobites go to them for advice.

Shock troops of the Sundermages, the hodrak are a race of warriors hailing from a highly radioactive planet dripping with heavy metals which they chelate through the natural bone armor that grows over their entire bodies — carapaces as strong as power armor. They’re 7′ tall. They’re fast. They’re brutal. And they use radiation-leaking blasters that would blister a human hand to the touch.

Are there any alien races established by other sci-fi games, movies and stories that feel appropriate to Grimmerspace? That GMs could use for inspiration?

We’ve tried to be as original as possible when designing races and creatures. We didn’t crib from other IPs and call it homage. I have a thing about being as original as possible. But in Star Trek franchises you tend to have an iconic warrior race nemesis, like the Jem’Hadar for instance. In Grimmerspace, those would be the Hodrak. Archetypes are archetypes for a reason. But inspiration from a single source doesn’t compute. Grimmerspace represents a wide-ranging distillation of everything we’ve ever seen and loved since childhood held together with a gluey ocean of never-before-seen ideas. And there are a good few of the latter.

It feels like the Alien RPG was announced hot on the heels of Grimmerspace. How do you think the two games will differ?

Alien is an amazing storyline. Its canon falls within narrow, but extremely effective storytelling parameters. There is a single feel and you get to feel it over and over again. A familiar flavor. “What is alien going to murderbreed now? OH COOL! AN ALIEN GOLDFISH! LOOK OUT, KID!” Grimmerspace easily facilitates Alien-style horror, but it actually covers all different categories of horror. Fifteen, so far, in fact: Apocalyptic, Body, Comedy, Cosmic, Crime, Dark Fantasy, Erotic, Gothic, Occult/Religious, Psychological, Rural, Splatter, Surreal, Survival, War. We label every adventure with its predominant types of horror so that GMs know exactly what they’re in for. So as to our specificity of genres, we’re not an ice cream parlor, but we are a supermarket and ice cream is in aisle three, y’know?

Space is enormous. Does Grimmerspace have anything built into the setting that might help explain why certain races or creatures keep on encountering each other?

Space may be enormous, but the Gliding Rim is a dwarf galaxy. It’s rather small. You’d burn through every pair of sneakers in existence trying to walk across a millionth of it, but it’s still quite tiny compared to most. And much of it is inaccessible to humans. It’s a double bar spiral galaxy whose arms have twisted down “beneath” the top plate of stars and entwined in a vortex shape. Those arms form an area known as the Gyre. Things come up from the Gyre, but almost no one enters it and returns alive (or sane after what they’ve seen there).

What tips do you have for GMs to help them get the most out of all the alien races found in Grimmerspace?

Understand the layers. Delve into the setting. Know that we built from the bottom up. Every alien race, every aspect of Grimmerspace, is a multi-faceted reflection. What type of horror does this alien race encompass best, what themes, what intensity of play? Once you get that, how best to use an alien race as an NPC becomes clear. Thinking a little bit about that is a tool we want to offer GMs and players to support their roleplay choices. We’ve tapped some of the best award-winning talent we know to make sure Grimmerspace is a motherload of multi-layered gaming richness. You can play it for grimdark cinematic action, sure, we love that. But you can also take a moment and dig in. That’s the best tip we can give.

The alien races of Grimmerspace: An interview with Rone Barton 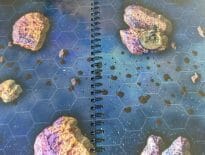 Tabletop & RPGs A spaceship in your bag: A review of the Big Book … 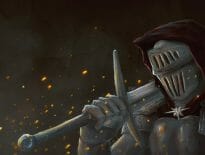