You are here: Home / Games / Console / The virtual reality of Table of Tales: The Crooked Crown

Do you use Roll20, Fantasy Grounds or a similar solution to facilitate your tabletop roleplaying? This blogger is just back from a gaming convention in which some players said they prefer the online experience for its better immersion than actually being around a table.

What does the next step on the evolutionary path of online tabletops contain? Virtual reality? The jury is still out on that one, but tech powerhouses are investing, VR and mixed reality headsets are on to second and improved generations, and we’re beginning to see more software.

Table of Tales: The Crooked Crown

Table of Tales: The Crooked Crown is an RPG adventure for PlayStation’s PS VR. It’s due out next week and is published by the developer Tin Man Games.

This game is not one which lets a GM run a story with a group of players, but it certainly nudges in that direction. It’s a virtual tabletop in a digital world in which you can see gaming minis move across and on which you can roll dice for combat and other mechanics.

Games like The Crooked Crown are helping to embed VR tech into households while showcasing the art of possible. In this case, the game itself looks pretty interesting, mixing graphical styles while presenting the whole adventure in the unusual in-person but watching from afar aspect you might normally only otherwise get in wargaming or miniature heavy tabletop games.

There have been lots of Deadly Games Game Master characters in games, but many are very antagonistic and only have one goal: to kill you. A big part of Table of Tales is bringing to life a Game Master who is more like real-life GMs: they challenge you, yes, but really they’re on your side. They love the game and want you to have the best and most exciting adventure possible. That’s Arbitrix.

The virtual reality of Table of Tales: The Crooked Crown 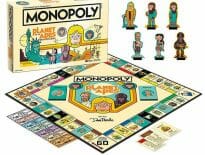 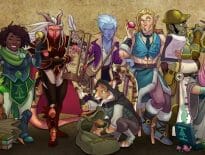