Leiji Matsumoto is the brains behind such historic anime successes as Space Battleship Yamato, Captain Harlock and Galaxy Express 999. He’s also the chap who worked with Daft Punk in 2003 for the full-length film Interstella 5555.

I much prefered Intersella 5555 to Space Battleship Yamato and the others. Why? It’s the anime style; what looks dated in the anime looks retro in the music video.

So let’s work with music video and cool tunes from the past. This week Leiji Matsumoto has released the anime music video he’s created for Queen’s Bohemian Rhapsody.

Just while we’re here. There is a Space Battleship Yamato movie in the works.

(A hat tip to Animevice for this one.) 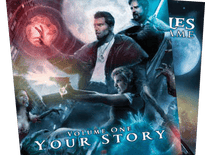