Prog 2015, due out April 3rd, shows alien immigrants from the strip ‘Grey Area’ sneaking through a familiar looking fence. They’re paying no attention to the anti-alien slogans that cover the border.

I wanted to depict an alien family escaping the Grey Area and have the father nervously regarding the ‘Welcoming signage’,”

“The mother dubious about the first steps into a ‘Brave New World’ that would have obvious parallels to images we have seen on the news.”

Grey Area is written by Dan Abnett, a writer known for his work on X-Men, the Punisher and Doctor Who along with his other 2000 AD titles.

Despite taking a shot at modern politics, Harrison also wanted to look at the evolving iconography used in current policial groups.

I wanted to express in part ludicrous officialdom in a humorous way so I looked at Area 51 and any signage referring to immigrants that seemed ‘official’ and found a sign created in the 1980s by a Caltran worker John Hood after deaths of illegal immigrants on the freeway, a sign designed to save lives has also been appropriated by some supporters of the Far Right who may not be aware of its original meaning.

With that in mind I adapted it as a flyers for such human groups outside the Grey Area expressing their dissatisfaction, along with using the warning signs as target practice!

“The warning signs themselves also parody the alien encounter clichés found in science fiction films; an acceptable fiction to make the grey more black and white and palatable and to popularise the “Easy narrative” over the complex and more nuanced reality.”

If you’ve had an enough of politics until Prog 2015 comes out then the recently launched We are all living in a Lovecraft story Chrome extension Geek Native reported on last week may be the escape for you. It censors specific political terms and names by swapping them with the much healthier Cthulhu mythos instead. 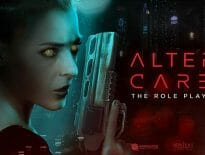 Tabletop & RPGs Altered Carbon tabletop RPG due out in 2020 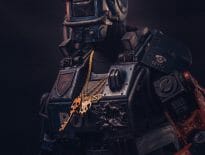