You are here: Home / Games / Tabletop & RPGs / Fantasy you’ve not experienced before: A review of The Silence of Hollowind

The Silence of Hollowind may well be a fantasy world, unlike anything you’ve experienced before.

This RPG is a high fantasy set in a world with technology levels similar to the 1920s and 30s, except powered by magic, except magic is banned. We’ll unpack Hollowind’s complicated relationship with magic in just a bit. In terms of technology, though, there are radios and trains. The army is on a gnome recruiting spree because they’re good shots and hard to hit. There are elements of Al Capone and an American style 30s with gangs and a thriving criminal underworld. There are also elements of pre-World War 2 Europe as the government is a merciless authoritarian regime with enforcers walking the streets.

It’s also worth noting that the rules for The Silence of Hollowind will be free. They’re available as Google Documents to Kickstarter backers right now, but the PDF releases will be made available to the public in the future. You’ll be able to download the Savage Worlds, 5e or Fate rules for the setting without paying a penny. It’s the setting that you will pay for. I’m glad I did.

The Kickstarter backer and English language edition of The Silence of Hollowind is 144-pages long. The lead designer and illustrator, Luca Bellini, is Italian and the books for Hollowind first appear in Italian. The English translation is flawless.

I think it’s a bold move to give the rules away for free and charging for the setting. You have to have absolute confidence that the world is rich and detailed enough for gaming groups to want to pony up the cash for it.

It’s also a sensible reflection of the RPG landscape. Who wants to pay for additional rules? With Fate, D&D and Savage Worlds options coming out the lion share of gaming groups out there can adopt The Silence of Hollowind without needing to change from their preferred system.

However, what you don’t get from reading the Silence of Hollowind is that gamer-joy moment when you read first about an exciting aspect of the world and then discover how it’ll be realised with the rules. I don’t know just how dangerous the mutating mists that surround Hollowind are, just that they’re supposed to be hazardous. I don’t know how strong giants are, or how hard it is to make a glyphic engine or whether bureau agents could take on a crowd of thugs two-to-one.

I do know that I would like to find out. The Silence of Hollowind is a compelling setting.

Year zero in the Hollowind calendar is a recent, in living memory, event. It was the year when the head mage, Merlin, announced that magic was dangerous, responsible for the deadly Arcane Plague and that everyone should stop using it.

That edict marked the end of the magic using ruling classes. A few years later, the low born classes in Hollowind – the metropolis collection that grew up in the mists around the base of the wizards’ capital – revolted. The wizards, already decimated by the Arcane Plague, fought unsuccessfully and fell to the new government.

There have been significant changes within that government since then. There are councils and competing power centres. Hollowind, the RPG, is set up to provide mystery, intrigue and internal conflict.

Guilds, those that did not back the defeated magic class, evolved into powerful corporations. These corporations have also seen their power ebb and flow, but they are genuinely influential. One corporation has a monopoly on the city’s impressive military technology, another builds and runs the glyphic engine trains that hurtle between the city ‘islands’ that compose Hollowind, cutting through the deadly mists in a way that no one on foot could hope to do.

Crime is rampant and criminals dangerous. There are gangs of ghouls, terrorist cells of wizards, organised goblin tribes run protection rackets and, at the same time, other groups coordinate to try and earn better rights for all races (or heritages as they’re called in Hollowind). There are pages of criminal factions, each one interesting enough to be the significant menace for any campaign.

Hollowind is an authoritarian place. The government is in place only thanks to a coup and is now wary of the very people carried it into power in the violent revolt. There are many police forces – bureaus – that many PCs will be part of.

The city’s motto is brutal. It is Order. Reveal. Persecute.

The Bureau of Order is most well known to the population of the city-islands, surrounded by magic mist, that makes up the collective whole of Hollowind. They are a constant presence on the streets and keep the city under control. If the crime is not arcane in nature, then Bureau will be investigating it.

Made up by some of the veterans of the uprising, the Bureau of Persecution investigates less than the Bureau of Order and spends more time hunting threats. As standard, officers are equipped with melee weapons, firearms including machine guns and have access to advanced equipment like Lightning-glyphs, Mist-glyphs and Weapon-glyphs that can enchant their gear.

Dealing with the arcane threat, the Bureau of Revelation is made up of the best officers from the others. These investigators can fight but generally call in the Bureau of Persecution for when it comes to that, and they specialise in dealing with threats far higher up the Merlin Scale than anyone else.

The Bureau of Censorship works to keep dangerous information way from citizens. Censorship is part of Hollowind’s authoritarian nature. Importantly, information is actually harmful. The Arcane Plague is a real thing and despite the government not sharing this information the plague is still active, boiling away in the shadows, killing people. Exposure to magic quickens death in Arcane Plague victims.

Hollowind’s relationship with magic is interesting, to say the least. The mages were once the oppressive ruling class (although, as the city is now discovering, perhaps they did keep the dragons at bay…). Magic seems to be responsible for the Arcane Plague, and it was Merlin who declared magic should cease. For a while the city banned it. Nine years after Merlin’s edict Hollowind changes the rules so that they could use glyphs and develop the magical-technologies of the city. Now the wording of the law is;

Hollowind is a democratic country, founded on freedom and the refusal of unregulated magic.”

And the city is surrounded by magic. Hollowind is actually a collection of ‘urban islands’ trapped in a magical mist. These islands grew in those places around the foot of the wizard’s tower where the mist rarely gathered. There’s nearly 200 of them, though many now abandoned.

The RPG setting set-up is perfect. You’ve dozens of urban locations, each with its own gangs and personalities, connected by magic powered trains and perhaps a few other ways. You’ve metropolitan towers that rise up to safety, above the mists, in the big islands. Each one of these is an adventure setting. Travel between each one can, if you wish, be a drama.

The Silence of Hollowind does noir well. Fantasy, cop-show, noir. Indeed, the recommended structure to any campaign is to run it like a TV series. Each adventure is a standalone episode, but string between some (perhaps all) of the sessions are clues to an overriding plot arch. PCs as bureau members fit this design perfectly.

Hollowind isn’t perfect, though. I wish it used more spaces between paragraphs. In the game, the ‘Silence’ is a newspaper, and at times I felt as if I was wading through newspaper columns of text. I think the art in Hollowind is, but I think there needs to be more of it. Notably, we need to see what the PC suitable heritages (races) look like.

I look forward to seeing how The Silence of Hollowind develops. I think the PDF versions of the rules will be important (will they be easy enough to read and navigate) to get players on board and for gaming groups to preach about the setting. All it takes is one Netflix series to try a fantasy noir and Hollowind will be booming.

My copy of The Silence of Hollowind is a Kickstarter backer PDF.

Fantasy you’ve not experienced before: A review of The Silence of Hollowind 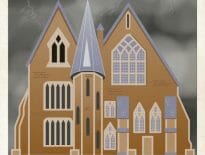 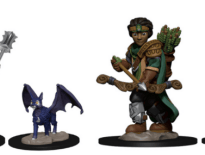