I rather liked the Scarred Lands somewhat-grim alternative to a fantasy epic but the last time I can recall writing about it was years ago when Onyx Path partnered with Nocturnal Games to get the project going again. Sadly, since then, Nocturnal Media’s founder Stewart Wieck has passed away.

Now Onyx Path is pushing on with the project and has appointed the newly launched Handiwork Games to manage the project. There’s a Kickstarter coming and this will add to the growing number of 5e Scarred Lands products already available.

Last year, when we were planning just how to take the efforts that Stewart Wieck had started and run with them, we knew that a new version of the legendary Creature Collection was how we wanted to lead into Onyx Path’s new exciting era of Scarred Lands.

Running parallel to that, one of my creators in tabletop RPGs, Jon Hodgson, artist and creative director, was putting together his own game studio after his long years at Cubicle 7. Jon did just about everything over there, and as we talked, I realized that he had the experience and awesome artistic taste to take a project from concept all the way through to printing – including running a Kickstarter for it.

The Scarred Lands Creature Collection for 5e will be written, art-directed, and laid out by Jon Hodgson’s company: Handiwork Games!

That’s such a ringing endorsement for Jon Hodgson that his old teammates at Cubicle 7 might be smarting.

I’m really excited to get the chance to work with Rich and Onyx Path. We met as Guests of Honor at GenCon a couple of years running, and realised we had a lot in common, and a shared drive to make great games.

Scarred Lands is an extremely cool setting, and I’m delighted to get the chance to work on the latest version of what was such a historic book – the first 3e monster book! I’m pulling together a great team of 5e experts and artists, and we’ll do our very best to delight you with the Scarred Lands Creature Collection for 5e! 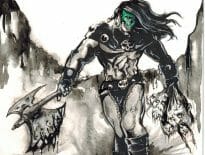 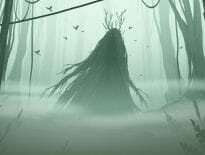