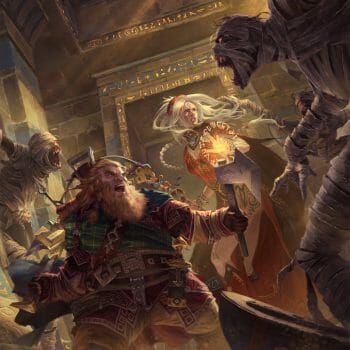 The big news this week from Paizo Publishing is that Pathfinder 2nd edition is coming. First up there will be a big playtest.

It was May 2016 when the same publisher announced Starfinder. That RPG is a version of Pathfinder in a sci-fi setting and the hardcover for Starfinder was released in October 2017.

Has this all happened too quickly?

Geek Native asked some popular gamers what they thought;

Is this the right time to launch Pathfinder 2nd Edition?

Our hobby is one that finds new fans years after launch, so I can’t think of a bad time to release a product in that sense; the right audience will pick it up if not this year then maybe further down the line.

From a business point of view, however, you want the most amount of sales in the short term because that goes into allowing you to focus on future support and products. To that end, I’d say Pathfinder 2nd Edition is right to launch now. There’s plenty of disposable income floating around, it’s been a few years since D&D 5th Edition came out and people are starting to get used to news of amazing future releases fairly frequently be it a new kickstarter or film or game or album. People are experiencing a lot of gaming right now, so another log on that fire will only stoke it.

No, after Starfinder too much too fast and we just dropped 200 bucks on hero lab 1st ed. lol 2019 would be better…

With the rise of 5th Edition D&D, Pathfinder needs to come back swinging if they don’t want to lose out on the huge influx of new players entering the hobby. New players are immediately attracted to D&D’s brand recognition, and now that WotC finally has a very beginner-friendly ruleset they’re pulling in all of the fresh blood. The hard part is going to be making the game slick and accessible while still maintaining the things about Pathfinder that its player base loves: tactical combat and detailed character builds. It’s going to be very interesting to see how Paizo pulls off that balancing act.

The DMG Info, a YouTube channels with over 17K subscribers, said;

Pathfinder players and products have been a little under represented in the hobby as of late. Piggybacking on the success of the Starfinder launch it is only natural that the fantasy arm of the the game get a fresh new overhaul.

Starfinder feels like quite a new game. What on your thoughts of a second edition of Pathfinder being announced so soon after Starfinder’s launch?

I think it’s fine. Starfinder is a different setting and feel entirely.

I feel it is good to keep the momentum going. People want some variety. Pathfinder has an opportunity to add elements to the hobby that other games lack, or do not handle well. The core audience will also be looking for backwards compatibility, so any changes will need to keep that in mind, or provide some mechanism to allow the first edition players to transition their characters, stories and worlds into the new edition.

Warcraft and Starcraft came out within 4 years of each other, and tabletop RPG’s are developed and released all the time. Paizo has the benefit of being a big name now, so they could release a new game each month and still have people buying their stuff. Everyone remembers that the D20 System had dozens of books coming out each year during its heyday for everything from D&D to Spycraft, D20 Modern and so on, right?

Proximity to another product doesn’t mean as much anymore so long as you have time to take a breath between them. They could drop 2e tomorrow and I think enough time has passed since Starfinder that they’d have an audience and fans.

If you want to get a feel for Pathfinder then the Roll Mongers’s podcast ‘Cilton’s Core Classics Actual Play Podcast: Pathfinder’s RIse of the Rune Lords Anniversary Edition’ is a good starting place.

Has Paizo launched Pathfinder 2nd edition too soon after Starfinder?

Tabletop & RPGs What do you do as a DM when you realise you’…
wpDiscuzComment Author Info
Loading Comments...
Comment
×
💰 Copper Coins 💰 Geek Native is an affiliate and may earn commission on purchases you make from third-party sites.
🍪 Privacy & Cookies 🍪 The site uses cookies to survive. By accessing the site, you agree to use your browser to control cookie use or take 1d4-3 privacy damage (tracking). If you defeat cookies via ad blocking, please consider the Patreon. An intro to cookies, and how to control them, can be found here. I Manage Cookies