Dungeons filled with monsters, illusionary bridges or Mimics pretending to be cobblestones are all well and good in a high fantasy dungeon where there is plenty of magic.

The challenge of trapping a dungeon in a low fantasy realm is a bit harder. There’s only so much you can do with hiding bear traps in the loose rocks near the cave mouth, right?

This post has 24 ideas for low fantasy booby traps for your dungeon. Add your own suggestions in the comments below and see if your idea becomes a DM favourite!

Still looking for booby trap ideas? Check out the comments below or dig into some classic RPG literature in the form of Grimtooth’s Traps.

Art by Ksenia Svincoca and shared under Creative Commons. Like it? You can buy the print at Society6.

I think a good trap might be a larger hunting trap or multiple falling, then hanging from the ceiling on chains and chomping on whoever is under it. Another good one could be that two large slabs of stone flip up vertically holding the victim between them.

I like both! Flipping the vertical stone labs might also reveal something to distract the rest of the party with an immediate problem. 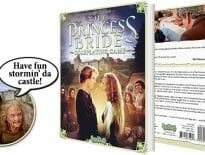 Comics Shades of Magic prequel – a new comic book b…
wpDiscuzComment Author Info
Manage Cookie Consent
This site uses cookies 🍪, and links are ads that may earn bloggers some money 💰, and with this alert, I very much hope that these dark truths 🧌 are acknowledged.
Manage options Manage services Manage vendors Read more about these purposes
Preferences
{title} {title} {title}
Loading Comments...