You are here: Home / TV / Anime / Magical anime: A review of “Fireworks, Should We See it from the Side or Bottom?”

This is a review of the 2016 anime and not the live-action film by Shunji Iwai which has the same name. What a name, huh?

The question of the fireworks is a big one that runs through this magical anime so let’s get straight to it. Are firework explosions flat like a disc or round like a globe? This is the question debated by a group of school friends. Given that this is an anime, 2d world, there’s a bit of a joke between the animators and the audience here. Notice the lengths the animators go to create 3d circular effects whenever the debate resurfaces, even if the animated characters remain 2d.

A nice touch is that these characters might live in a 2d world but they quickly start to feel very real, fleshed out and full.

It’s a wind-up. Most of the kids know that fireworks explode into a circle – they’ve waved sparklers after all – the blooms of light just look like they might be discs on a plane when viewed from far away. This wind-up results in the group going off to view the city fireworks from an alternative angle in order to settle the matter once and for all.

These are the sort of adventures boys bond over and set “Fireworks, Should We See it from the Side or Bottom” a charming slice of life anime. It is gorgeously animated, each frame oozing quality, love and attention.

But there’s a catch. There’s a girl – Nazuna Oikawa, voiced by Suzu Hirose – and more than one of the boys has a crush on her.

This delicate situation is magnified with the help of a little, magical, orb. Have you ever had the misfortune of wondering in forlorn hope if only you had made a different decision, if only you had gotten their first if only things had worked out differently? This is exactly the hope the magic in Fireworks addresses.

I was reminded about the challenges of accepting wishes from genies as I watched Fireworks. You sometimes have to be careful what you wish for. A simple and well-intended wish can sometimes go badly wrong.

The combination of this uncertain magic and summertime escapades results in a story that’s rich in emotion and uncertainty. If this doesn’t result in you hiding behind your hands then you’ll enjoy getting caught up in the drama.

I fully expect Fireworks, Should We See It from the Side or the Bottom to be a big hit – despite the weird name.

In life – round like a globe.
In this anime – I can’t say without spoilers.

Magical anime: A review of “Fireworks, Should We See it from the Side or Bottom?” 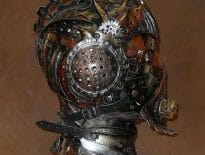