You are here: Home / Books / Best of three: A review of The Girl on the Liar’s Throne 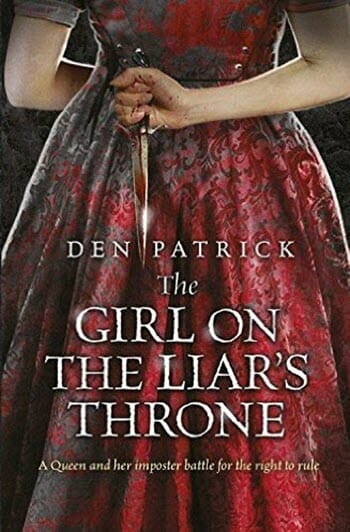 The Girl on the Liar’s Throne is a rare fantasy – it is the last in the trilogy and the best in the series. You can check my reviews for the first book The Boy with the Porcelain Blade and the sequel The Boy Who Wept Blood and see how the series starts of good, gets great and then finishes with a wow.

I guess there are some spoiler risks, mild ones, in this review as we are talking about part three of a set.

We’re left with the wrong person on the throne at the end of The Boy Who Wept Blood and many of the heroes, people who might oppose her, are dead. Where could we go from that?

We can start by discovering some truths. Some people are not who we thought they would be.

This isn’t a reveal that Den Patrick takes his time working up to. This (or some of it; at least) is how The Girl on the Liar’s Throne begins. From there we’ve the whirlwind of events that unfold as people try and do something about it.

We’ve the usual mix of politics and Machiavellian cunning. In this case the spider spinning the webs of manipulation is a giant mutant living in the bowels of the castle so stabbing your way clear of the danger isn’t going to be any easier. But there is plenty of stabbing; don’t expect a Game of Thrones bloodbath but don’t get too attached to your favourite character (as The Boy Who Wept Blood taught us).

There’s a bit of a Hail Mary in this book. As was built up to and part of the conclusion in the previous adventure there’s a failsafe device-cum-army that, if activated, should help clean out the castle. I was worried this would be a done-deal after The Boy Who Wept Blood. As it happens, that failsafe is both dramatic and perhaps the weakest part of the plot – yes, it gives the heroes the chance to do something as it ties up the evil army, but it affects them just as much and it’s hard to see what the original plan was.

By and large The Girl on The Liar’s Throne lacks the frustrating flashbacks that irked me so much in The Boy with the Porcelain Blade. We don’t really need to flash back in time any more – we know the history and the characters.

This trilogy would make an excellent setting for an RPG.

I thoroughly recommend it.

My copy of The Girl on the Liar’s Throne was provided for review.

Best of three: A review of The Girl on the Liar’s Throne