You are here: Home / Books / Gothic Prince: A review of The Boy with the Porcelain Blade 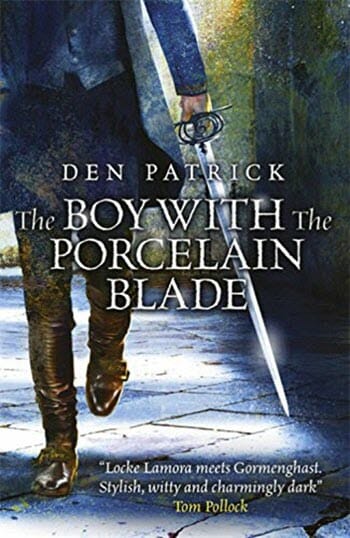 The Boy with the Porcelain Blade

I’d read a blurb of The Boy with the Porcelain Blade long before the book arrived on my desk as a potential review option and I knew I was interested. There’s a lot in the title; “Porcelain Blade” sounds gothic, interesting, fragile and dangerous.

I forgot to consider “The Boy”. Our hero is young. In flashbacks he’s even younger. The age might not be such a problem but Lucien flips from being intelligent, wilful and masterful to falling over and waking up in danger.

I get the “Prince” part of this title from Machiavelli’s “The Prince”. In that essay Machiavelli writes about House politics of Italian noble families and how to survive them. That’s the very challenge our Lucien finds himself in. The twist? These are gothic fantasy houses and that makes it twice as interesting.

The fantasy is low key here. There’s the hint that the King has lived for a very long time. There’s a hint at an unusual beginning to the nation. It’s certainly true that one of the noble houses, the Orfano of which Lucien belongs to, isn’t entirely normal. They’re all deformed. I could use the word “mutant” but don’t let X-Men images come to mind. One of the Orfano doesn’t speak. Another weeps blood. These are the mutations of the most unlikely of the Houses in the palace. The sequel is called The Boy Who Wept Blood.

We follow the progress of the young Lucien as he approaches his last test and seeks adoption into another House. The Orfano are an exception to all other houses locked in a battle for influence around an unseen King. The Orfano, when they come of age, are adopted by another House. The Houses on the receiving end of the deal inherit a highly trained and feared noble in exchange.

Overall; I liked the book. It’s incredibly well written, Den Patrick has both skill and imagination, and I know I’ll pounce on the sequel.

It’s the shadow book I didn’t like so much. Once we get going almost every chapter is a flashback. I know it’s necessary; we need to know why people have turned out as they are and the background to their decisions. Perhaps The Boy with the Porcelain Blade was too good because I found myself speed reading the flashbacks in my hurry to find out what happens next to the characters.

We can safely count on Lucien getting beaten up in the “what happens next” but the interesting part is in how that drives the twisted plot forward and what the consequences are. From the outset this is a game of life and death.

Fan of fantasy? Especially gothic fantasy? Got some Edgar Allan Poe tucked away on the shelf back there? Yup? Give The Boy with the Porcelain Blade a chance.

My copy of The Boy with the Porcelain Blade was provided for review. Den Patrick, published by Gollancz.

Gothic Prince: A review of The Boy with the Porcelain Blade