I was given some Green Lantern cufflinks as a gift and I still get a kick out of the secret geek they represent. It’s rare that I need to be suited and booted but when it happens I’m clearly out of my geeky comfort zone. Being able to smuggle in something that’s both classy and geeky is a help and a secret nod to any other geek you might encounter.

Cross’s range of superhero pens are the same. These aren’t disposable and cheap tubes of ink. These are gifts. My Spider-Man Tech2 costs £30 and there’s a Century II rollerball range that costs £95.

Expensive for a pen? I wonder. I’ve spent enough time in airports to see just how insane some gift pens are. I think Cross is actually in the sweet spot of prices. This is something you’d treat yourself too because of a big event or, more likely, as a gift.

And the Tech2 isn’t quite a standard pen either. There’s a rubber nib (note to self; don’t call it the ‘nipple’ in this review) which works on most capacitive touchscreens. In other words, you can spin this Spider-man around and enlist in your Ingress battle or to dismiss the duplicate invites you’ve just suffered for that meeting in 15 minutes time.

The first thing I noticed when I took my Tech2 Marvel out of the box was out light it felt. The official spec says 19 grams (9.9mm by 136mm). In practical terms; a wobbly, bobbly Hulk can carry this pen. 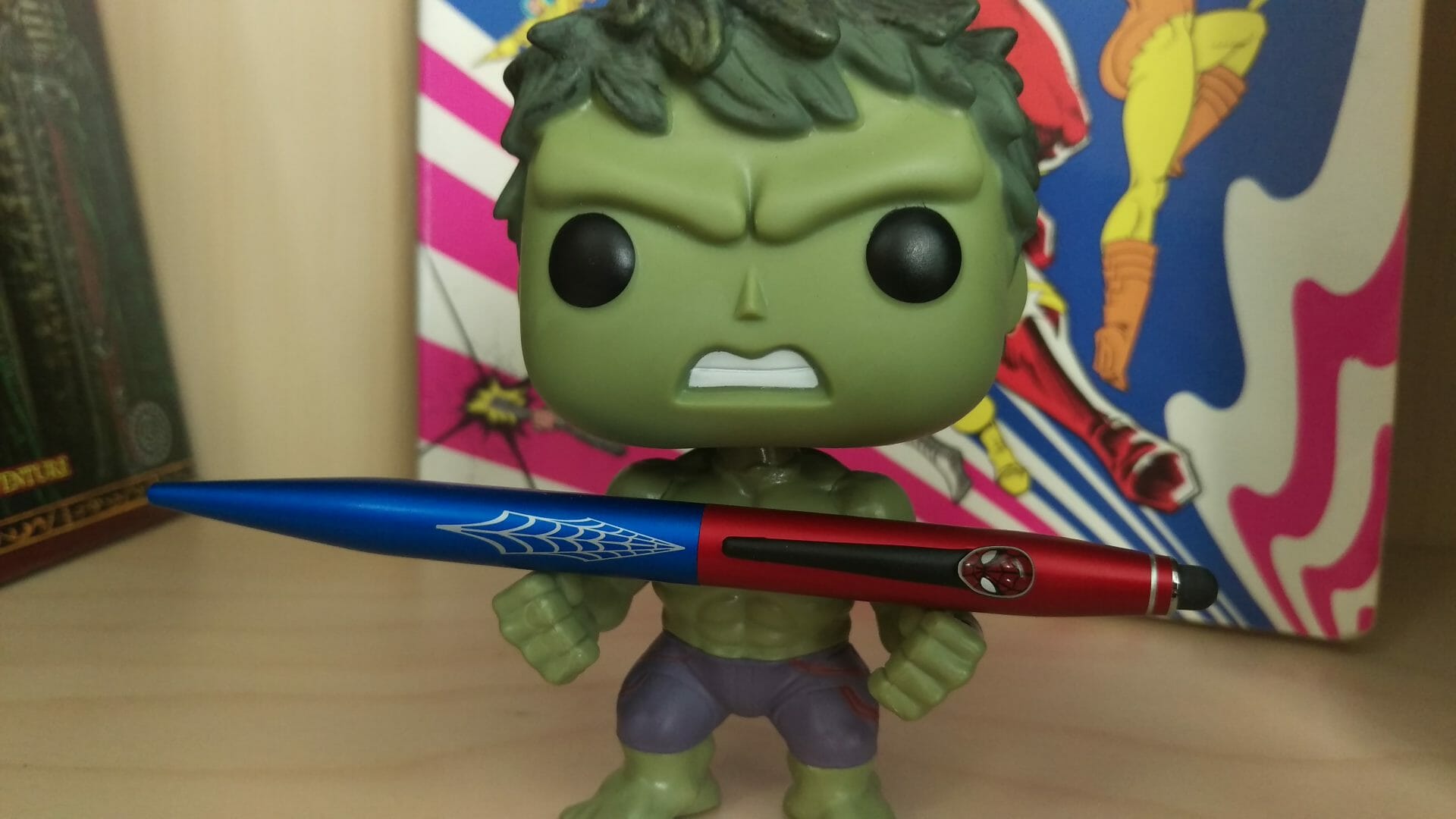 I’ve been using Spider-man for a few weeks now. He has a tough life with me, living in a coat pocket alongside a Nomad USB cable, my business card holder and Earin charging container which is metal. It replaces a steel ThyssenKrupp rollerball that’s done me proud for years. I’d expect the steel ThyssenTrupp to stand the bashing it would get in my pocket but I’m surprised that the lacquered Barrel of the Spider-man pen is still fine.

As it happens I think the lacquered barrel is the make or break feature of the Cross Marvel Tech2 range. Do you want a pen that looks normal or one that a fellow geek might notice? This Spider-man pen isn’t just red and blue; it as a wee Spidey face for a clip. This is a pen that will ping fellow geeks when you use it. 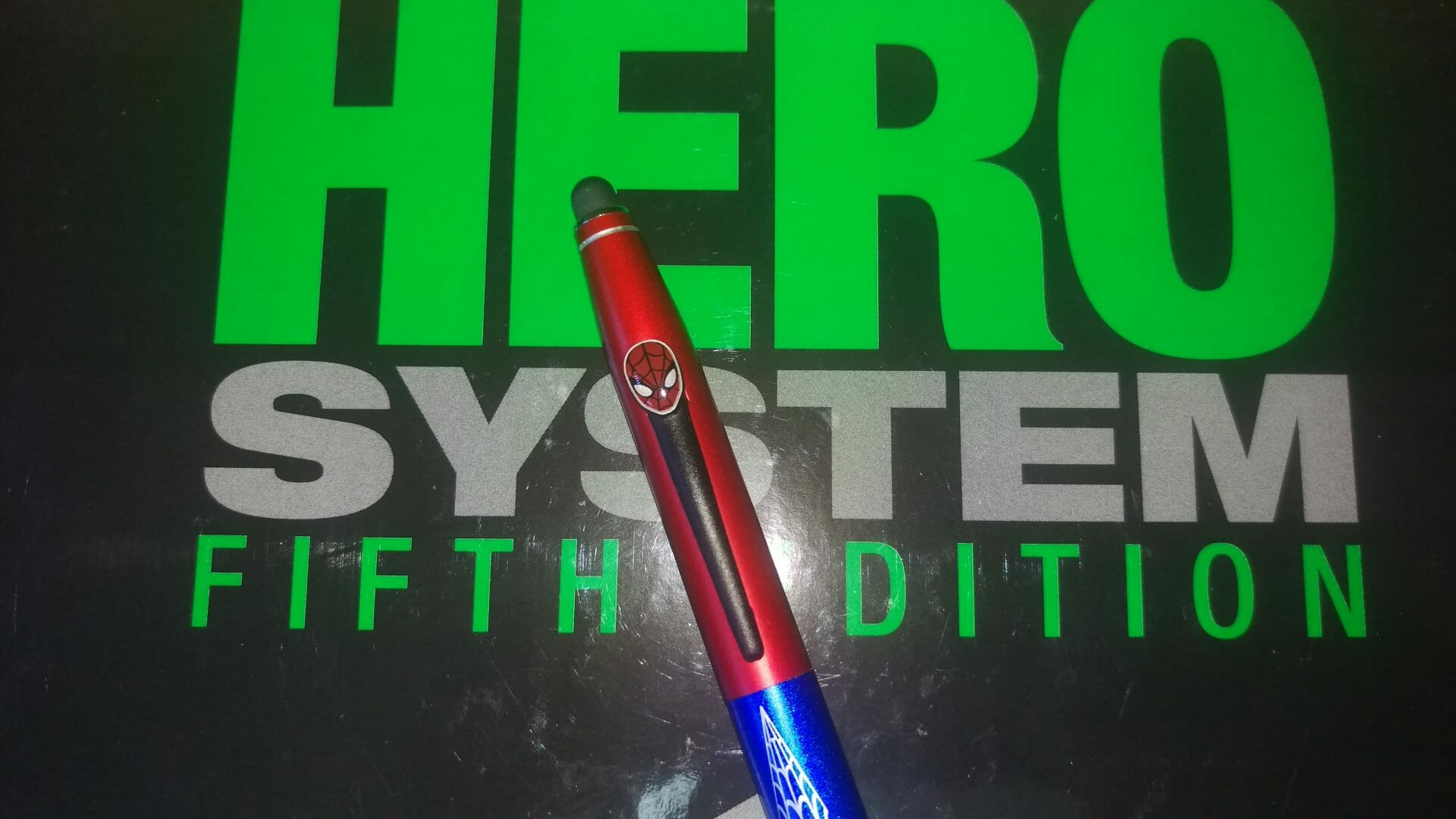 Lastly, and most importantly, it’s easy to write with the Tech2 Spider-man. The ink flows smoothly. I’ve tried a few surfaces and the pen performs as you’d expect. It’s thin but not so thin that it’s weird to write with. This is a neat pen.

My Cross Marvel Tech2 Spider-man was provided for review. If you’re ever unlucky enough to have to read my handwriting you’ll know why I went for Spider-man.

Geek Stuff Character illustrations for those who can’t …
💰 Copper Coins 💰 Geek Native is an affiliate and may earn commission on purchases you make from third-party sites.
🍪 Privacy & Cookies 🍪 The site uses cookies to survive. By accessing the site, you agree to use your browser to control cookie use or take 1d4-3 privacy damage (tracking). If you defeat cookies via ad blocking, please consider the Patreon. An intro to cookies, and how to control them, can be found here. I Manage Cookies