You are here: Home / Geek Stuff / Can a vampire ever be considered a “good person”?

There’s been all sorts of vampires on TV, film and comic books in the last few years. The chances are your idea of a traditional vampire isn’t the same as someone else’s any more. The thirst for blood, however, remains constant.

Last year, Geek Native had a copy of Kim Newman’s Anno Dracula – Johnny Alucard to giveaway so ran a competition to pick a winner. To enter the competitions readers had to consider a philosophical question.

Could a vampire still be considered a “good person” despite a thirst for blood. Readers had four options to pick from; yes, no and two “depends”. The results are pretty clear; most people, nearly half, thought that despite the curse vampires could be good. The next biggest group were people who thought the opposite; vampires are supernatural evil. 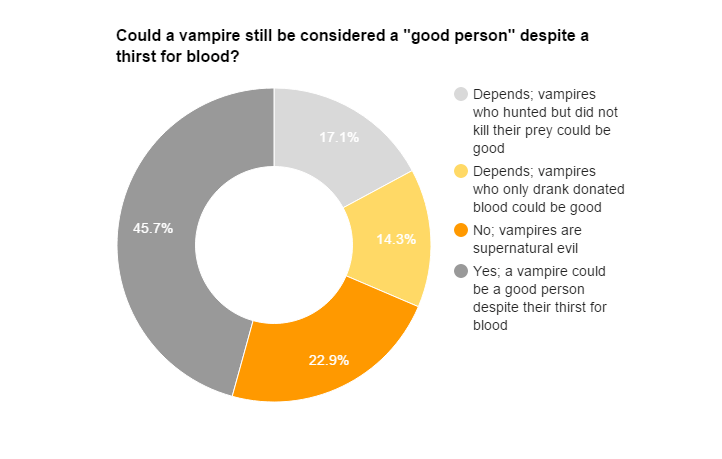 Here’s the breakdown of the research;

Let’s run the poll again but take out the middle ground and force the hard choice. Can vampires be considered good despite their need for human blood? Yes or no?

Can a vampire ever be considered a “good person”?

Online Shows Netflix posts final Daredevil 2 trailer
💰 Copper Coins 💰 Geek Native is an affiliate and may earn commission on purchases you make from third-party sites.
🍪 Privacy & Cookies 🍪 The site uses cookies to survive. By accessing the site, you agree to use your browser to control cookie use or take 1d4-3 privacy damage (tracking). If you defeat cookies via ad blocking, please consider the Patreon. An intro to cookies, and how to control them, can be found here. I Manage Cookies