I was excited by Golem Arcana, described it as an attempt a whole new board game genre, backed the Kickstarter and got the game.

Golem Arcana is clever as it mixes technology, with some great models and the board game. The tech tells you how to play, revealing the moves creatures can make.

But I’ve never played it. Why not? I only get a few chances to try a new board game with friends – we’re all tight for time, right? Golem Arcana wasn’t very portable so it couldn’t be brought with me (or I decided not to, for convenience) to the local gaming café and as a result it slipped from my mind. Only now, writing about how Durani: Champions of the Western Wind will be the final expansion that it occurs to me – I don’t even know where the game is. I moved flat. I’ve a new gaming cabinet. It’s not in there. 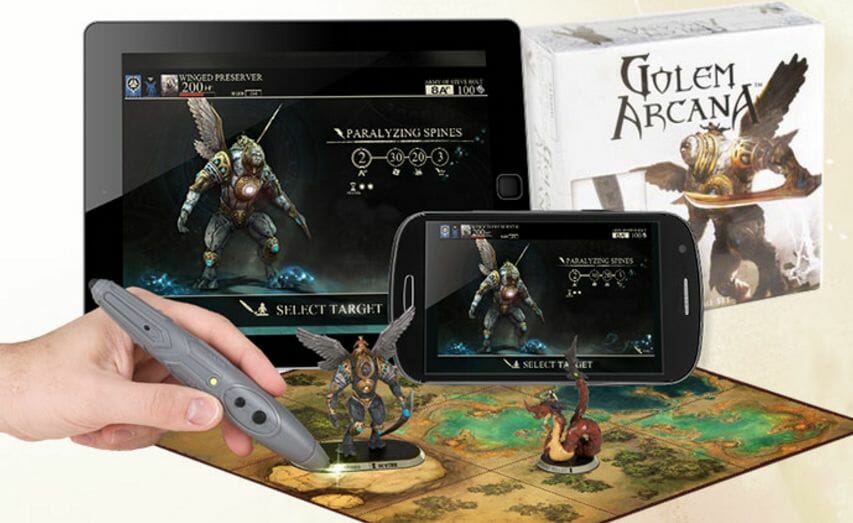 This is the fate of the unfortunate board game and perhaps Golem Arcana was just ahead of the time. My gut feeling is that an augmented reality board game will make it big, very big, in the coming years and it’ll define a new genre of games.

Harebrained Schemes is being heroic to the end; updating their app to support as many iOS and Android devices as possible. This is another indicator at the costs of the project. In a blog post they say;

We here at HBS are devastated that we can’t continue to expand this ground-breaking game. We poured our hearts and souls, as well as millions of our dollars, into a landmark development in tabletop hybrid games. We’re very proud of this game, with glowing reviews by everyone from Penny Arcade to Game Informer, and an Origins Award for Best Miniature Figure Rules. Unfortunately, sales have not recouped our extensive investment in software and manufacturing.

The most recent code-update from the end of 2015 is the final state of the App, representing our best foot forward for supporting as many iOS and Android devices and operating systems as possible at that time. We recognize that there are still many minor bugs and sometimes unexpected behavior, and that future devices or OS updates may create additional bugs.

We appreciate your support of Golem Arcana and trust that you understand the financial reasons why we cannot continue to develop the game. Starting on Jan 27th, we will be running a sale on our web-store until the end of February, while supplies last at our warehouse. We’re also moving up the release date of the newest Durani expansion so it can be included in the sale. Afterwards, we’ll be shutting down the web store.

Right now and until Feb 29th there’s a big sale at the Golem Arcana store. Use the code FINALE to get 50% off. It looks like many Golem Arcana fans re rushing to take that deal as “Sold Out” signs are appearing everywhere.

Tabletop & RPGs D&D Mimic dice bag
💰 Copper Coins 💰 Geek Native is an affiliate and may earn commission on purchases you make from third-party sites.
🍪 Privacy & Cookies 🍪 The site uses cookies to survive. By accessing the site, you agree to use your browser to control cookie use or take 1d4-3 privacy damage (tracking). If you defeat cookies via ad blocking, please consider the Patreon. An intro to cookies, and how to control them, can be found here. I Manage Cookies