There’s an impressive pedigree of talent on this project. We’ve got Jordan Weisman at the helm. He’s already help create BattleTech, Shadowrun, Earthdawn as well as the click base concept you see for MageKnight and Heroclix. Harebrained Schemes have had some serious Kickstarter success in the past.

Is Golem Arcana a step too far? The concept looks impressive but the Kickstarter pitch is asking for $500,000 and, at the time of posting, it has 9 days on the clock and nearly $200,000 still to collect.

The game uses a bluetooth stylus to read data on the base of the models, on the game board and fact sheets to send gameplay information to an iPad (well; they say Android too) in order to play the game. It means you don’t need to wrestle with huge rule books and get a multimedia experience with sound effects and animations. This means they’re not just making a board game with some impressive figures, they’re making bespoke hardware, multi-platform apps and wrestling with server configurations too.

It’s cheaper to pledge and get the Base Game than buy at retailer (for US customers, at least). So, what do you get? You get the app which works on iOS, Android and Windows (you need Bluetooth 4). You get the stylus, quickstart rules and lore book, 6 modulfar terrain tiles, 2 control cards, 2d10, a Bramble Horn War Sprite with card, Dryad Titan with card, Woodguard Ogre with card (all from the Zikia Golems), Tusker War Spirite with card, Plague Bringer Ogre with card and Raven Storm titan Tith card (from the Urugal Golems). In addition you get digital Ancient Ones, Blood Knights and Golem Knights.

The Bluetooth 4 requirement has caught people out on other Kickstarters. It’s good to note that Harebrained are offering an in-theme Bluetooth 4 adapter that plugs into headphone sockets.

Stretch goals may be unlikely but do paint a pretty picture. At $550K the game includes Remote Play. In other words you can connect your devices over the internet and play with friends online. This is impressive. 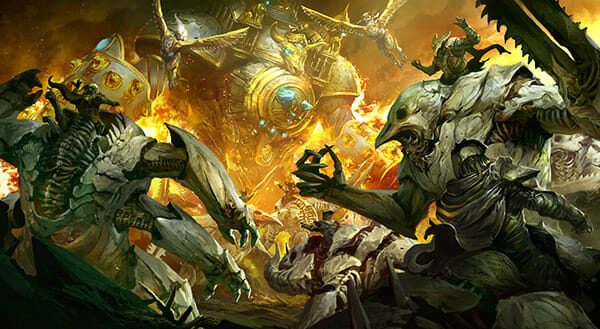 Art Darth Drogo – The Star Wars Game of Thrones …
💰 Copper Coins 💰 Geek Native is an affiliate and may earn commission on purchases you make from third-party sites.
🍪 Privacy & Cookies 🍪 The site uses cookies to survive. By accessing the site, you agree to use your browser to control cookie use or take 1d4-3 privacy damage (tracking). If you defeat cookies via ad blocking, please consider the Patreon. An intro to cookies, and how to control them, can be found here. I Manage Cookies