You are here: Home / Books / Comics / Witches and Assassins: A review of Assassin’s Creed 1 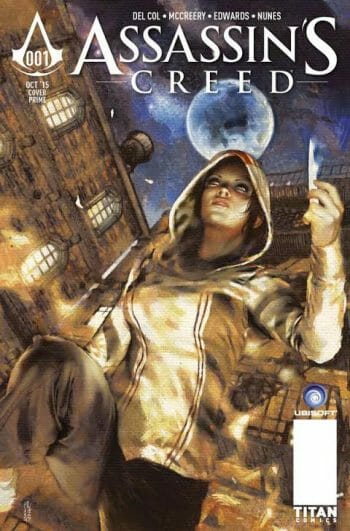 I won’t have a go at writers Anthony Del Col and Conor McCreery for spelling things out for readers. You often have to be direct in comics as space is a premium. Assassin’s Creed 1 makes incredible use of its space as it packs in three different adventures, three different time eras, in just the first issue.

I’ve played some of the Assassin’s Creed games but they came out too quickly for me and they’re so good they actually tease my mild acrophobia but just a few pages into this comic and I was wanting to go back to the series and give it another go. Easy to see why transmedia titles and comic book support are so hot right now. They work.

I also like the cross-gender ancestor play. Who says Charlotte de la Cruz’s ancestor and the Salem witch trials was a woman? Of course, that would have been as remarkably interesting as it would have been dangerous. In this case the assassin ancestor is bushy Tom Stoddard.

There’s a Doctor Who moment when we’re reminded that the time-travelling Animus users can’t really change history and there’s consequences when they do. Yet, just like in Doctor Who, we know a lot of the action will be heads on, knife deep, interaction with history.

I think the first issue does a great job at covering off all these key points. We know the Brotherhood and the Templars are at war, a nasty one, in the future. We know that this goes back through time and why the Animus is used in the first place. We know the risks of doing so and why certain people are important.

I think artist Neil Edwards has done just as well. The art is fantastic. Fantastic art has always been a feature of the Assassin’s Creed franchise and it was paramount that the comic book series kept up the quality. That’s certainly achieved here and while there’s covers from the likes of Dennis Calero, Marco Turini, Adam Gorhman, Ashley Marie Witter and others I’m very happy to have the series’ main artist as my cover artist too.

What Neil Edwards manages to achieve is a blend between “this is definitely real” and “this is definitely an adventure”. This is vital in a series that blurs the lines of fantasy, reality and history. The world is crisp and clear and yet there are touches of darkness at times. You can’t tell by looking at someone whether they’ll going to be a villain or not.

The video tour below is made from Google’s Photo Assistant and uses filters for colours and effects.

Disclaimer: My copy of Assassin’s Creed: Assassins #1 was provided for review. The comic book is available from October 14th from Titan Comics.

Witches and Assassins: A review of Assassin’s Creed 1

Cool Tech Man builds real life Mjolnir and trolls with Thor&…
💰 Copper Coins 💰 Geek Native is an affiliate and may earn commission on purchases you make from third-party sites.
🍪 Privacy & Cookies 🍪 The site uses cookies to survive. By accessing the site, you agree to use your browser to control cookie use or take 1d4-3 privacy damage (tracking). If you defeat cookies via ad blocking, please consider the Patreon. An intro to cookies, and how to control them, can be found here. I Manage Cookies