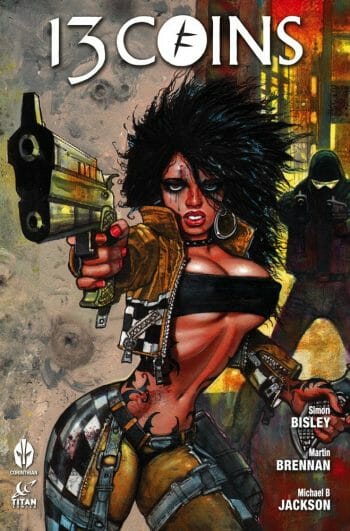 All the good ingredients are present. I liked the art. The genre is a favourite of mine – “high religion occult” – where angels and demons are real, battling each other in a contemporary setting, TMNT’s Keven Eastman give it a thumbs up and Simon Bisley, Martin Brennan, Michael B Jackson are not names one backs away from.

It’s hard to say exactly why 13 Coins didn’t sit well with me. It might have been the pacing. It’s almost Matrix in style in that our hero goes from being an unremarkable Joe to being a super human – but it’s not quite that. For a start our hero is remarkable, he’s a bit of a twat, having ruined his life on drugs and then insisting on being a strong headed fool. It’s hard to feel much empathy with him. I think the treatment of the female characters annoyed me too. Don’t get me wrong, I enjoy the presence of sexy ladies in my escapism – especially if they’re a strong female character – but the ones in 13 Coins didn’t seem to serve any other purpose other than to wear tight trousers and suffer nip-slips in the middle of combat.

We’re beginning to see how, against all odds, the strong set up of a group of (low) super-powered humans, the descendants of actual angels, are struggling against the overwhelming demonic presence left on Earth can begin to lose interest. 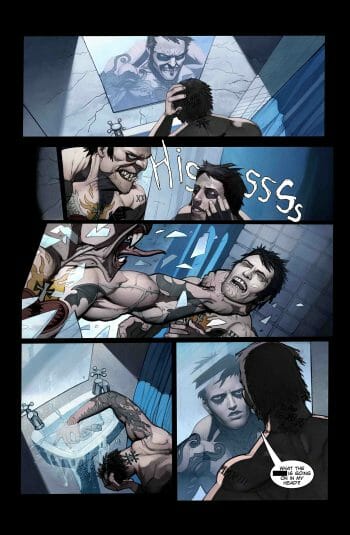 Some readers may enjoy the sign-posting in 13 Coins but I think one of the big attractions of the genre is the mystery. You know many things are possible but just how much of it will happen; when we’re dealing with a battle in heaven but down on the rain soaked streets, just how far will things escalate? This is no mystery in 13 Coins. The showdowns, the plot direction, the character development is spelt out clearly. It’s much more like being led by the nose through a visually rich path. It’s an Ikea of mayhem; follow the store design, see the big ticket items you’re supposed to see and then checkout on schedule.

Martin Brennan and Michael B Jackson did Hitman: Absolution together and Simon Bisley is an Eisner Award-winning illustrator (Lobo and the Batman/Judge Dredd crossover). It’s entirely possible that this pedigree combined with my expectations for the angel-horror genre led me astray but I just couldn’t get into 13 Coins.

There’s just one catch. If I really didn’t find much solace with 13 Coins then why am I looking forward to seeing whether there’s a sequel? Could it be that the world they’ve created remains full of potential? Does the twist (which you’ll see coming) right at the end of the book offer up the promise of plot development and intrigue? It might be the case.

The video tour of 13 Coins below was created with Google+ Photos. It uses a colour filter, special effects and my poor photography.

My copy of 13 Coins was provided for review. It’s available in hardcover from the 18th of August in the UK and on Kindle now.

Against all odds: A review of 13 Coins 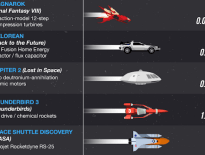 Geek Stuff Can you guess the results? The fastest sci-fi spac… 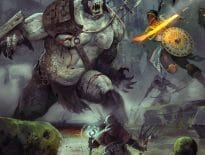