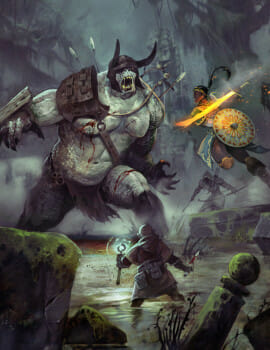 Hot on the heels of the excellent Dragon Age RPG Core Rulebook, publisher Green Ronin de-coupled the setting from the system and released the Fantasy AGE Basic Rulebook.

The Fantasy AGE Basic Rulebook is, almost literally, the rules from the Dragon Age RPG, scrubbed of its setting, and presented for use in any fantasy campaign of your choosing or design. What few changes there are amount to little more than a re-organization of mechanics from Dragon Age to better accommodate a range of fantasy settings. For example, races are no longer baked into backgrounds; in Fantasy Age, a player chooses a race, then chooses a background. The backgrounds are organized by social status, so some of the political strife from Dragon Age makes its way into the main system. The magic system has been expanded to include a wider range of abilities, but it still works roughly the same way it did in Dragon Age, minus all the setting material about corruption, the Fade, etc.

While the Dragon Age RPG Core Rulebook was a massive, self-contained tome promising years of adventure, the Fantasy AGE Basic Rulebook gives you just enough to get started. Weighing in at only 144 pages, Green Ronin may have taken the “basic rules” idea a little too far. Without being constrained by the world of Thedas, why are there still only three classes? Why only six races? Why not add more talents and focuses? Why only one magic system? Why stop so short of even 200 pages? The answer, of course, is “these are the basic rules only; there will be sourcebooks!” With the relative dearth of content in the Fantasy Age Basic Rulebook, it is painfully obvious that Green Ronin is pushing aggressively for fans to pick up Titansgrave, Fantasy AGE’s first non-Thedas setting, when it drops later this summer.

Still, though, the opening commitment is a relatively-cheap $15 for the pdf, so it’s not like the game is asking for too much up front. As was the case with Dragon Age, Fantasy AGE is quite possibly the best alternative to D&D on the market today. If you’re already in deep with Dragon Age, there’s little in Fantasy AGE that’s worth the investment, but RPG enthusiasts looking for a light, fun, setting-less system for their fantasy games will have an absolute blast with the Fantasy AGE Basic Rulebook.

My copy of the Fantasy AGE Basic Rulebook was provided for review and you can read my Dragon Age RPG review here.

You don’t really need more than the 3 classes. The point of the Adventure Game Engine was a streamlined and easy method of creating multiple types of adventure. FAGE does this more as an SRD than an actual rulebook, but the point is still there. It’s True20 but without the cumbersome feats. I do agree it would have been nice to see a race or two more, but I think the point they made was to give us the backbone of fantasy culture and allow adventure/setting books to add to the mass. Titans Grave introduces the Saurians, the FAGE book… Read more »

While what shadesofkin has written is true, I want to emphasize that AGE is being treated as the successor to the True20 system. This is another reason why large swaths of AGE work the way they do: same 3 classes, Backgrounds work pretty much like Paths did, etc. Really, the stunt mechanics are the only *major* change to the True20 stuff — you’re otherwise even using more-or-less the same resolution mechanic: try to roll high, add any relevant bonus, and check whether or not you exceeded some difficulty rating. That said, there are plenty of more minor changes and simplifications. If I… Read more »

Opening Act: A Review of the Fantasy AGE Basic Rulebook 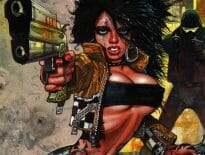 Comics Against all odds: A review of 13 Coins 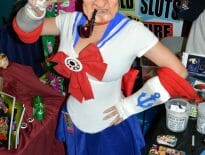