You are here: Home / Games / Tabletop & RPGs / Kickin’ it Old School: A Review of How to Game Master Like a Fucking Boss 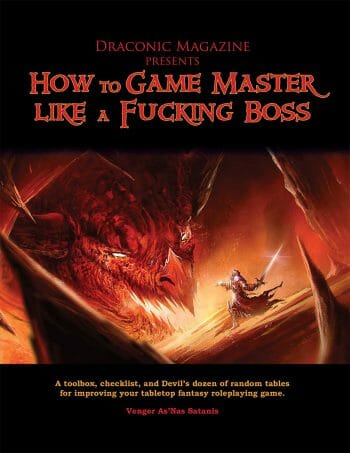 In the wonderful world of tabletop role-playing games, there are two separate yet equally-important schools of thought: the “old-school” style of play perpetrated from classic editions of Dungeons & Dragons through the 80s, and the “new-school” style of play coming from the rising indie RPG movement of the late 90s through now. How to Game Master Like a Fucking Boss is decisively a book in the “old school” camp that, as the title implies, shows you how to emulate the classic 80s style of play.

Written by blogger and adventure-writer Venger Satanis, How to Game Master Like a Fucking Boss is a 124-page crash course on game mastering an “old school” roleplaying game. The book is loosely organized as a series of articles on various topics of interest to the aspiring GM. It would have been nice to see some tighter organization, but since there’s really only about 60 pages of writing here (the rest of the book’s running length are random tables for dozens of different categories, and a few generic maps for short-order use), it’s not that big of a deal. Of particular note is Venger’s writing style. Venger has a casual, conversational style that draws you in quickly. It won’t so much feel like you’re reading a book as it will seem like you’re actually in someone’s basement, Venger sitting next to you behind the GM’s screen, giving you advice as you go along.

Venger is clearly an experienced, knowledgable GM who knows who he is and what he does and he presents it clearly in this book. This can cut both ways, however. Venger makes some bold assumptions about your game in his advice. Although he never comes out and says it in the text, he assumes that your adventures will be swords-and-sorcery pulp fantasy. He assumes your adventures will always have some kind of dungeon in them. He assumes you will be playing D&D or some retro-clone spawn of it. And he assumes your gaming group will be mostly 30-and-40-something white males. Here, for example, is some advice he offers on including sex appeal in your games:

“Indeed, sexy women make the world go round. Without going overboard, pepper your campaign with exquisite curves, creamy thighs, and delicate ruby-red mouths. Seduce the players with her physical attractiveness. Compare her to a famous celebrity like Megan Fox or Kristen Bell. Better yet, come prepared with a picture of some unknown woman from the internet or evocative piece of RPG art.”

There are other references in the book around these lines, and even some art to back it all up. Tellingly, Venger writes in the early parts of the book on the importance of professionalism in a GM, then goes on to fill the book with swears (including the title) and references that, to some, could be described as sexist or chauvanist (he even calls himself out on it, later in the book). Does this make the book bad? No, certainly not. But it all plays back to this book’s laser focus on its target audience: the old-school gamer. Venger is unapologetically disinterested in any other kind.

Still, though, GMs old and new will find at least a little something useful in this book. As long as you don’t mind a little un-PC(political correctness, not player character) attitude, How to Game Master Like a Fucking Boss will, indeed, help you do just that.

Note: My copy of the book was provided for review.

Kickin’ it Old School: A Review of How to Game Master Like a Fucking Boss

Books Competition: Win Glass Thorns – Window Wall…
💰 Copper Coins 💰 Geek Native is an affiliate and may earn commission on purchases you make from third-party sites.
🍪 Privacy & Cookies 🍪 The site uses cookies to survive. By accessing the site, you agree to use your browser to control cookie use or take 1d4-3 privacy damage (tracking). If you defeat cookies via ad blocking, please consider the Patreon. An intro to cookies, and how to control them, can be found here. I Manage Cookies