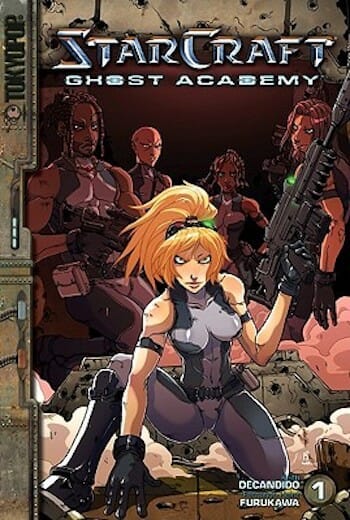 Licensed by Blizzard and published by Tokyopop, StarCraft Ghost Academy is written by Keith R.A. Decandido and has Fernando Heinz Furukawa as artist.

Decandido is pretty experienced. He already has the Buffy the Vampire Slayer novels “Blackout” and “The Deathless” to is name as well as Doctor Who anthologies “Destination Prague” and “The Quality of Leadership” as well as a host of other impressive titles.

I imagine, then, that StarCraft Ghost Academy (v1) isn’t his finest work. Don’t get me wrong; it’s not a bad comic book. It’s just that I felt I’d read it before. That’s because the set up is all too predictable. Lio, a Fourth-Class trainee in the Academy being the only possible exception.

Lio, though, isn’t the star. The front cover belongs to Nova, a powerful trainee ghost, who gets off to a bad start with the readers by being a jerk. She doesn’t recover her status with us before the end of the comic and that leaves us with much willingness to follow her adventures any more. In fact, the end of the graphic novel is weakened further with the hint of a false start, or worse, a retcon of sorts. Can’t really dig too deeply into that without giving the plot a way – even though it feels all too predictable.

You know what this book is about. We’ve got a bunch of trainees, who all seem quite different, having to learn how to operate as a group. It’s a road we’ve walked together many times down many different graphic novels. StarCraft Ghost Academy needed to try harder to be different.

That said; I’m still likely to order the second volume – after all; this is StarCraft and we are following the Ghosts here. There’s the promise of politics, aliens and action all bundled together and that’s an intoxicating mix.

It’s not as if StarCraft Ghost Academy is a complete waste of space. It’s professionally scripted and well drawn. It just lacks that wow-factor. I read it all in one sitting and that’s a good sign; I did want to find out what happened next. Although the incentive to find out how well Nova does isn’t there the same isn’t true for the other characters. Gabriel Tosh, in particular, not only gets a sympathy vote but seems to be a pretty cool dude as well.

In summary; Ghost Academy is for graphic novel fans with a willingness to give the StarCraft franchise a little time to get up and running. Don’t expect a rocket speed start.

Review notes – I bought and paid for StarCraft Ghost Academy and was not contacted by Tokyopop prior to writing the review.

time to read: 2 min
TV Neil Gaiman will write for Doctor Who 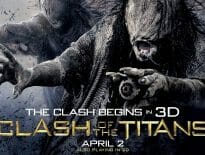 Movies Clash of the Titans posters
💰 Copper Coins 💰 Geek Native is an affiliate and may earn commission on purchases you make from third-party sites.
🍪 Privacy & Cookies 🍪 The site uses cookies to survive. By accessing the site, you agree to use your browser to control cookie use or take 1d4-3 privacy damage (tracking). If you defeat cookies via ad blocking, please consider the Patreon. An intro to cookies, and how to control them, can be found here. I Manage Cookies