You are here: Home / Games / Tabletop & RPGs / Break Out or Fall Out: review of Behind the Walls for Fate Core 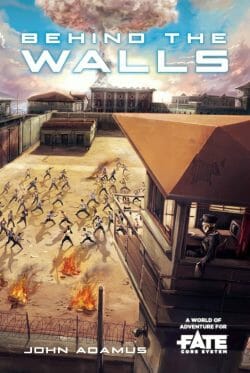 Behind the Walls on RPGNow

Evil Hat Production has leveraged the power of Patreon and burgeoning support for Fate Core material to crank out some top notch supplements and adventures for their game. Unlike crowd-funding, which drives people to contribute toward a lump sum, the Patreon-model supports ongoing and regular content. Evil Hat has used this regularly ‘income’ to draft in writers and illustrators to produce an expanding range of planned product.

Behind the Walls is the most recent example of this process – and as good an example as any to receive a brisk overview and review.

Format
You can pick up Patreon-funded supplements, like Behind the Walls, in electronic or physical format. The physical booklets share their general appearance with the Fate Accelerated Edition of the core game. A slim, perfect bound booklet with a cover that feels rather nice, sort of silky. The internal layout mirrors that used throughout the range since the introduction of the Fate Core system. Clean, clear, easy to read, with scattered examples and generally good illustrations. In this instance, Mirco Paganessi provides some very flavourful and appropriate images, communicating just the right tone.

For the purpose of review, I have the PDF – running to 44-pages, and written by John Adamus.

Features
Behind the Walls is one of the series of World of Adventure supplements for Fate Core. To be clear from the outset, this – and all previous books in the series – represent a broad brush, high level setting, with just enough detail and crunch to get going, but nothing like the features and funky stuff of a full blown game. You can expect to improvise a session or two from the content here, but if you want more you will need to give it a little more consideration.

The game sets down the premise to kick off. Players control prisoners locked up in the Collins Park Correctional Facility at the close of the 1950s. The facility has all the stresses, dangers and pressures you’d expect, with prisoners struggle for status, possessions and their lives. Simple enough. Except, someone dropped a big bomb. After the defeat of the Nazis in Europe, things didn’t go so well. Tensions bubbled and in the end, conflict erupted. Rather than drifting off into Cold War, Russia and the US ended up running hot. However, Collins Park sits sufficiently far from anywhere that it weathered the storm – and The Warden stuck to his guns. He would continue to run a tight ship and enforce the rule of law in his facility.

Rather than just playing a game of Prison Break or post-war Colditz, you have a locked down community cut off from a world filled with uncertainty and, perhaps, ongoing conflict. Given the slim page count, only the final couple of pages give much consideration to what might lie beyond the walls.

As Fate Core provides a generic core rule set, most world books and supplements include something new to provide a degree of differentiation. Behind the Walls keeps changes to a minimum.

The Skills available to characters follows the Core, but refines Lore to a more specific and focused Knowledge, and adds Invent – which allows wily prisoners to improvise gadgets from scavenged storeroom scatterings and kitchen utensils.

An additional step in character generation also assigns a little story goodness to each skill, requiring that players add a brief phrase to indicate how their character uses the skill, either to survive here and now or perhaps before they got caught. One character with a high Fight skill might always “Go for the Eyes,” while another might favour the knife skills he learned in the forces, “Can’t Stand, Won’t Fight”. These aren’t Aspects, but they offer a similar twist; choosing one will add an extra degree of personality to your character.

Behind the Walls also puts a slight spin on Stunts. In Fate Core, Stunts allow a character to use Skills in unusual ways, offer a bonus under very specific circumstances, or even break the rules completely once per game. To reinforce the close community and relationships within the prison, Walls suggests some new approaches.

Personal Stunts link into the phrases you chose for your skills or the focus made through specialisation. Because of something, you get some benefit. Unlike standard Stunts, these associate with situations not skills. You have used your skill in a certain way in the past, so when something similar happens you excel.

Cooperative Stunts play up the tight friendships and associations in the prison community. When you set to a task to someone, you benefit from working together. Both individuals need to possess the same skill and you can’t rope a whole team into the benefit. You have learned to leverage the common talents of colleagues to do better.

The final type of Stunt, Secret Stunts, ties into another new facet the supplement adds into character creation – everyone has Secrets. Potentially the most challenging aspect of the setting, Behind the Walls seeks to instill uncertainty with World Secrets – things you don’t know about the setting as a whole that impact the characters, NPC Secrets – intentions and activities the GM-driven cast pursue that players characters might uncover over time, and PC Secrets – which have the potential to drive story, add depth and motivate gameplay.

Some groups might find that Secrets don’t add anything or feel they can’t handle it; they require a certain mindset and approach to the game that might tax some gamers. This isn’t necessarily about gaming experience; some people might find the business of secrets to fractious or contentious. The author offers different options for handling secrets, from the simple and open to something more complex. This really could be the Marmite feature of the setting for a gaming group.

The second half of the book presents an adventure, War and Peace, Love and Hate, which I only realised was the adventure after I’d got through a couple of paragraphs. That isn’t a criticism. The adventure reads like a journal of the prison’s daily grind, charting the progression of events from the wake-up call, through breakfast, on into work assignments. You get a map, descriptions of the environment, and the essentials of a plot, with associated characters.

On a personal level, I wouldn’t run this adventure as written. I like the way it merges setting with characters, scattered with events. However, the outcome of this adventure could all too easily mean the player characters end up on the outside, and that really throws away the potential of the setting to me.

Like a TV series – and I’m thinking of The Walking Dead or Lost here – you have the potential with Behind the Walls to milk a single locale for several interlinked stories before you open up new vistas and change the pace and personalities of the world. With careful planning and use of the materials presented, you could build up some great relationships and a lot of engaging conflicts, then throw the switch and change the stakes with what lies beyond the walls.

As I mentioned, the book only covers the world outside in passing. The GM has the option to run with almost anything – and I strongly believe the players should be the driving force behind that expansion. If they want zombies, give them the shambling nightmares they’re hankering after; if they would prefer the red tide of invading Communists or the desolation of a post-nuclear landscape, go with it.

The book rounds off with various characters and covers different kinds of guards in an early section. Depending on your outlook and expectations, the guards, the warden and notes about the setting might make you wonder whether political correctness gone mad has dulled the potential of the setting. From the outset, the author states no intent to cover matters sexual or ultra-violent.

Given the setting, both violence and sexual tension would seem a necessity, but in practice it makes sense to deal with them on a case-by-case basis. The book could have opted for the R-rated approach, but then certain groups might have felt uncomfortable or aggrieved that they have pages of material that need to be cleansed of unpalatable content. On the other hand, those wanting more realism will rail against the lack of coverage. Damned if you do, and all that.

Final Thoughts
As I read through the alternate history background presented in Behind the Walls, I found myself engaged. The slim book presents an enticing premise, without going into very much detail – just enough for a creative hook, but little more. I’m game to give it a go, and you can choose to draw on whatever media – film, TV, books or games – suits you to fill out the detail.

The book intentionally calls out the need to avoid over-worked tropes of lazy or corrupt guards, but I think you can take this anyone you care. If your gaming group prefers stereotypes, then run with it – anything for an easy life and a fun game.

The new material the book offers – around Secrets and Stunts – might be useful as an expanding part of the Fate Core system toolkit, or you could choose to ignore them. On face value, everything Evil Hat do for Fate Core has that label hung on it – choose what works for you. You can dial up what you enjoy, and dial back the stuff that doesn’t float your boat.

Those seeking detail and gritty reality will be disappointed with this – but, like the other books in the range, it isn’t try to cater for those people wanting fully realized worlds. The World of Adventure range seeks to jab hard at one potentially creative spot and see whether it works for you; if you don’t like it, don’t use it – or plunder the book for material you can use.

Evil Hat has produced more than half a dozen supplements from their Patreon campaign so far, with a slate of more to come. Even if superheroes, prison breaks, intelligent cats, or Tron-esque adventures don’t appeal to you, you can expect many more creative and varied worlds to come in the near future.

Reviewer purchased the copy used for this article. Behind the Walls, John Adamus, Evil Hat Productions, suggested price $4 – but you can Pay What You Want or get involved with Patreon and ongoing support for Evil Hat Productions Creating Adventures and Worlds for Fate.

Break Out or Fall Out: review of Behind the Walls for Fate Core 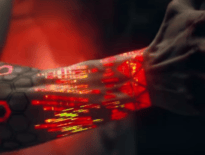 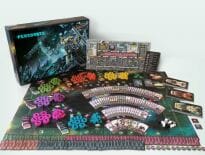